Hometown and background
I’m from Barberton, which is about 8 miles southwest of Akron. The town was founded in 1891 by an industrialist named O.C. Barber. The population grew rapidly because of immigration, mostly Slavic people from eastern and southern Europe, including my own family. In the early 1900s, my Baba (grandmother) and her family moved to Barberton from the Carpathian Ukrainian Mountains in what was then the Kingdom of Hungary and later became part of Czechoslovakia. My family name is Kerechanin.

My path to Metro Parks started with college. I went to both The Ohio State University and to Columbus State, starting in fall 1994. I graduated with an associate degree in biology from Columbus State, and with a full Bachelor of Arts degree in Parks and Recreation Administration from OSU, with a minor in wildlife management. My first career move was to become an intern for Ohio Department of Natural Resources state parks under the law enforcement route. I became a commissioned officer in 2001 and became a park ranger at Dillon State Park in 2002. Because of budget cuts, my role changed at state parks and my career path was uncertain. For a time, I was supervised by Pat Enright and Bob Durinsky at ODNR. Much later, after they retired from ODNR and became part-time rangers for Metro Parks, I had the honor of supervising them! In 2003, Pat told me that Metro Parks was advertising for ranger positions and after a number of interviews I obtained a position as full-time Park Ranger at Sharon Woods in April that year. I was promoted to assistant park manager at Sharon Woods in April 2007 and had a great working relationship with the park’s then manager, Don Yablonski. I sought a park manager position and was honored to become the park manager at Highbanks Metro Park in April 2012. Finally, I moved to my current role as a Manager of Park Operations in January 2020.

What I do at Metro Parks
I have a really fun job! Metro Parks created a role for me that built on the things I loved to do as a park manager at Highbanks and allows me to do those things for the district as a whole. At Highbanks, I loved to get involved with the planning of events, with the aim to draw in new people as park users, to build a relationship with them, and hopefully encourage them, by example, to become future supporters of Metro Parks in terms of volunteering or of voting for park levies. My new position started just before COVID disrupted the entire world. I’m proud of the work I was involved in at that time, in helping Metro Parks to provide places for people to escape to, when so much of people’s regular routines were stopped cold by the closure of entertainment venues, restaurants and recreation centers. We created procedures which allowed us to keep the parks open and to continue hosting events, such as the Winter Hikes and Scioto Fest. We were the only central Ohio organization that managed to host Summer Camps during that first summer of Covid! I now have particular management oversight responsibilities for Chestnut Ridge, Prairie Oaks, Scioto Grove and Slate Run Metro Parks, as well as Slate Run Living Historical Farm. I am also the project manager for the Hoover-Y program.

What I love most about my job
The only things that I do not love about my job is the very occasional need to discipline an employee. I never wake up regretting that I have to go to work. If I have to highlight one particular activity that I love above all else, it would be what I’ve alluded to already, the planning of events. I love to make a difference, to create a BIG WOW moment! As much as anything, the planning of the new features at Highbank’s nature center, during my time as manager of the park, reflect that BIG WOW momentum most precisely. The exhibition of a giant sycamore and a ravine wall in the nature center allowed us to bring the outdoors indoors, and visitors who were physically unable to make the arduous hike to the park’s giant sycamores got to see the massive scale of them up close and at actual size!

My favorite Metro Parks activity
I love to explore the parks with my two sons. Carson is now 13 and Lucas is 11. We head out to the parks at least once or twice a week, although maybe a little less often during football season. I’m a big Buckeye sports fan! When the boys were younger, they loved playing at the kids’ tree house in the Sisters Garden at Inniswood, going to Slate Run Living Historical Farm to see the animals or watch demonstrations of faming activities the 19th century way, or seeing the bison at Battelle Darby Creek Metro Park. Now that they’re a little older, they enjoy using the obstacle courses at Glacier Ridge and Scioto Audubon Metro Parks, or hiking off-trail in the ravines at Blendon Woods and Highbanks. My husband, Steve, owns and coaches a girls’ field hockey team, which often keeps him from joining us at the parks. But he takes the kids mountain biking at Chestnut Ridge and Quarry Trails, and on rugged hikes at Clear Creek and Battelle Darby Creek. I join them, when I can. I also enjoy mountain biking. 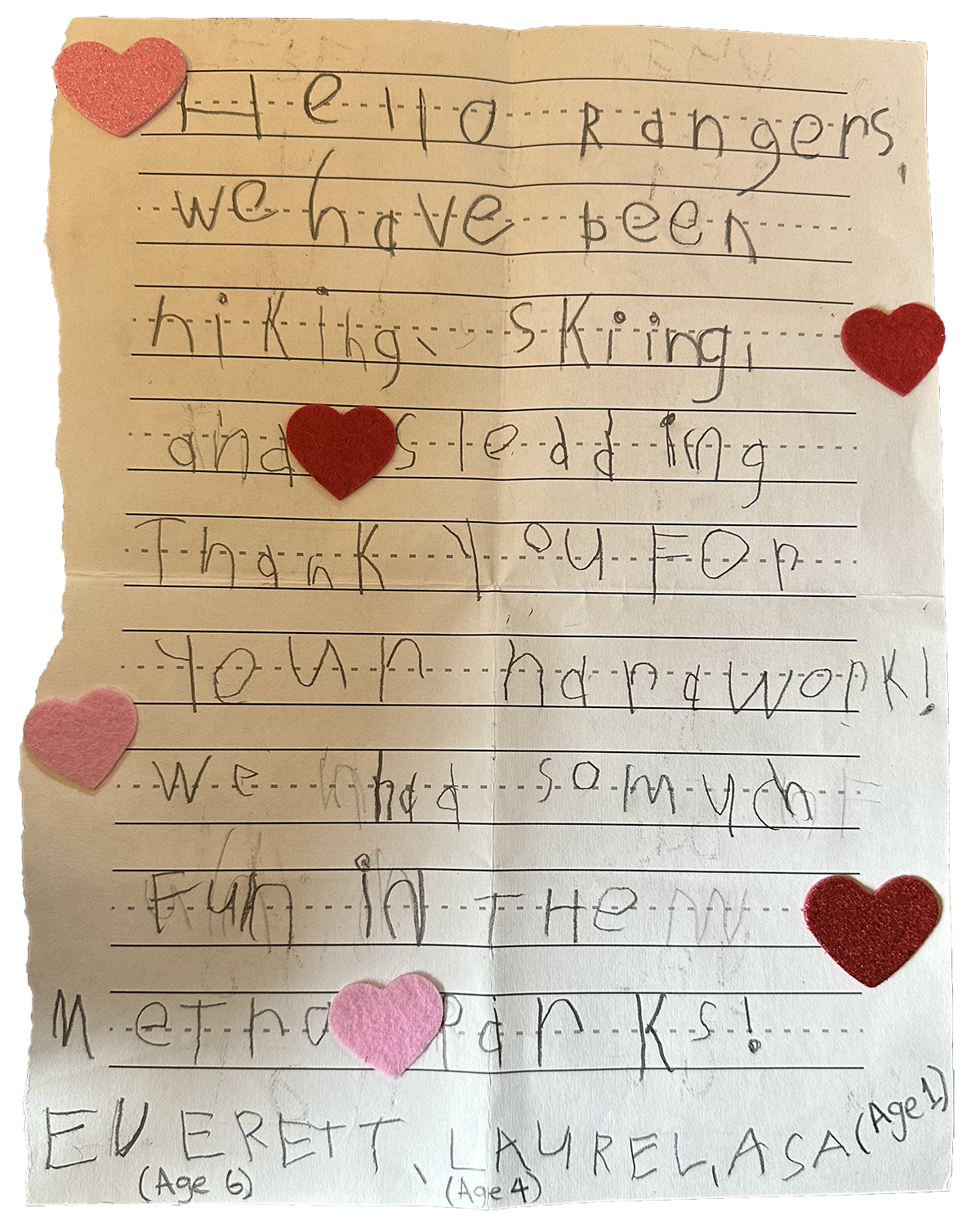 During Covid disruptions, when all the staff helped out doing tasks that wouldn’t ordinarily fall to them, I found myself opening a lot of envelopes from people mailing in their winter hike cards, to claim their winter hike patch. As well as a winter hike card, one envelope also contained a hand-written letter by a trio of very young kids, thanking park rangers for their hard work. The kids, Everett (age 6), Laurel (age 4) and Asa (age 1), had been hiking, skiing and sledding in the parks and wanted the rangers to know how much fun they had had. For most people, we mailed the winter hike patches out to the them. But I took the patch and a winter hike ornament to our new young friends’ family, and also gave the kids a bunch of stickers. Everett said that he wanted to become a ranger some day! These are the kind of things I love to do and I’m so lucky to be able to get to do them.

Something to share about creating a positive experience for our visitors
No matter what job we do, all of us in Metro Parks are public servants. I think we all understand how important it is for us to be professional at all times, and make every interaction we have with our visitors a positive one.

If I could go anywhere in the world and time and money were not a concern…
I’m blessed in that I’ve already traveled to many places that would be on most people’s bucket list. My husband, Steve, is Australian, and I’ve visited his family in Australia about six times now, and have taken our kids with us three times. I’ve also been to Fiji, and spent quite a lot of time in France, as my younger sister, Christina, used to live there. So perhaps, if I had the time and the money, I’d opt not just for a particular place to visit, but would instead like to tour the entire world, just fly east out of Ohio and continue going, stopping along the way, until we made it back after circumnavigating the globe. That would be epic fun!

Life news to share
My son, Lucas’s team, just went undefeated and won the tournament championship in 5th and 6th Grade Tackle Football for the Columbus Catholic Diocese. Lucas plays middle-linebacker. Meanwhile, 8th grader Carson is in the middle of trying to decide which high school to go to next. His choices are Bishop Watterson, St Francis De Sales, or St Charles Preparatory School. Although Bishop Watterson is close to our home, Carson seems to be leaning towards St Charles at the moment. He has to decide by December.

2. As a family, we love outdoor activities. Among our favorite activity trips, we’ve been snowshoeing and snowboarding in Colorado and Wyoming, paddle boarding in Florida, rock climbing in the Hocking Hills, and have enjoyed trips to numerous state and national parks across the country.

3. My family on my mom’s side is from Colorado, where my grandfather was an elk-hunting guide who took people into the mountains on hunting trips.

My favorite food and dessert
My two favorite dishes are what I also call my comfort foods. I cook them both. Halupki is a Slavic dish made with winter cabbage, wrapped around seasoned minced beef and rice in a tomato sauce. I like to spice my cabbage filling with paprika, parsley, thyme, and celery seeds, and cook the entire dish slowly for hours in a fresh tomato sauce. Pierogi is also a Slavic or eastern European dish, a kind of dumpling stuffed with either savory or sweet fillings. I like to make mine with a potato and cheese filling, or sauerkraut and cheese, and often fry them in butter with onions, or in butter with green peppers. For dessert, anything with chocolate will do!

My favorite entertainment
I don’t have much time for reading or watching TV, but I love to go to the movies. Some of my favorite action-adventure films from the 1980s have been shown again in cinemas in the past year or two, and my kids loved watching them with me and Steve, especially The Goonies, Back to the Future, and Lethal Weapon. My kids are also big fans of the Marvel movies, so Steve and I go with them to a lot of those. I also like to go to Buckeye games. I used to take my dad to a couple of OSU football games a season, but usually I take my kids with me now. Steve is not a big football fan—he prefers to watch rugby. We also go to a few Buckeye basketball and hockey games.

If I had just 60 seconds to share why I love working at Metro Parks, I’d say…
The main reason why I love working at Metro Parks is the people I work with. They make it very enjoyable for me to come to work. Also, I’ve learned so much from so many employees over the years. Especially I remember the times touring the parks with Deputy Director Larry Peck, learning all about tram programs from Allison Shaw, and working with Don Yablonski for so many years at Sharon Woods. But everyone here at Metro Parks has something to offer. As an organization, we’re focused on conservation and preservation, and that’s what I want for the future, to preserve our beautiful natural area parks for future generations.