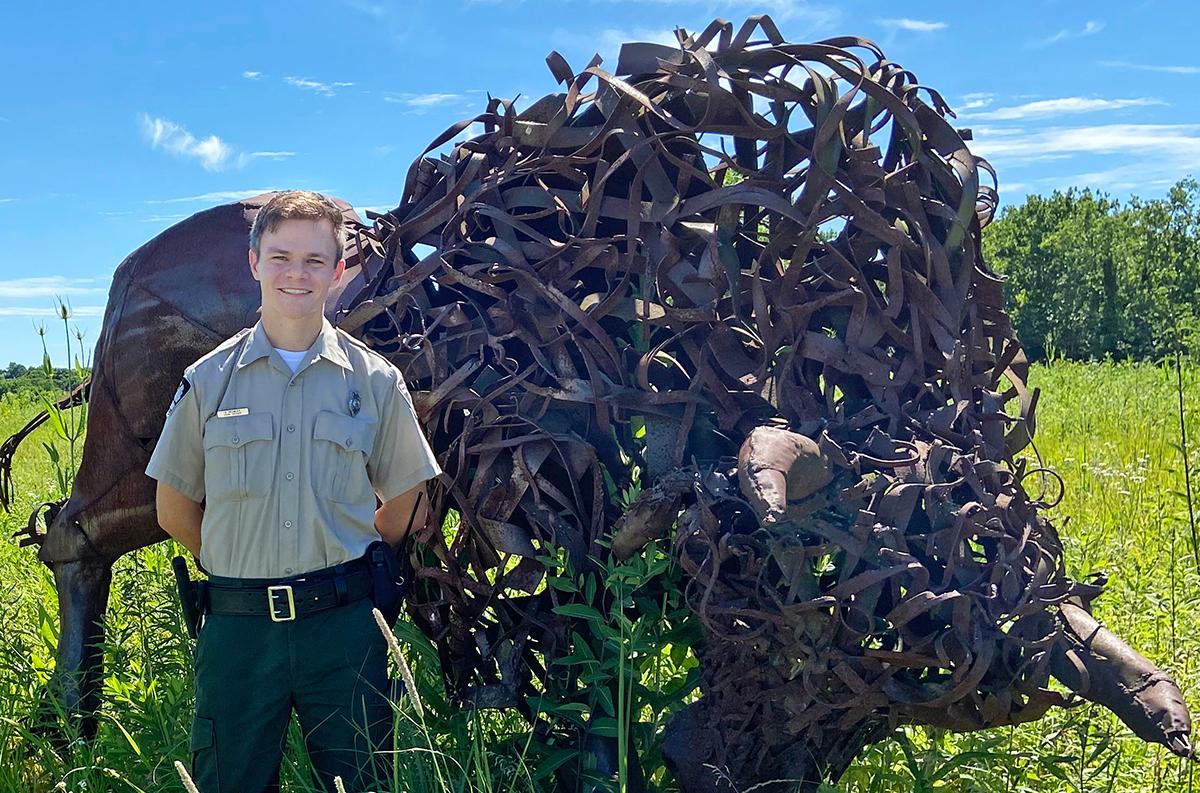 Hometown
I’m from Troy, Ohio, home of the famous Troy Strawberry Festival. It’s about 20 miles north of Dayton. Population is just over 25,000.

Years of Service
I started at Metro Parks on January 23 this year, as a Full-time Park Ranger here at Battelle Darby Creek Metro Park. I graduated last fall from The Ohio State University, where one of my professors was Metro Parks Deputy Director Larry Peck. I heard about several job openings for Park Ranger positions at the parks.

What I do at Metro Parks
As a park ranger, the most important aspect of my job is being present, by which I mean being there to ensure the safety of our parks and our visitors. Some regular duties are enjoyable and some are less so. No one really enjoys clearing trash, but we all understand how important it is to maintain our reputation for clean, safe parks. Trail patrol is perhaps the most enjoyable of all the regular duties. I feel so lucky to able to hike a beautiful trail—and actually get paid for it! I have some great conversations with visitors while on trail patrol. Some visitors can feel apprehensive, meeting a person in uniform, but most are welcoming. And especially kids! I like to issue them with one of our Junior Ranger stickers and swear them in as junior rangers for the day.

What I love most about my job
I get a real feeling of satisfaction to face tricky or difficult situations and yet remain in control. On a recent shift we faced three difficult situations, which all ended well. We had a visitor car fire, which may have been caused by a rat’s nest on the car battery, which ignited and led to half of the vehicle melting and most of the glass exploding. We calmly evacuated the area and called the fire department, which put out the fire. On the same day, we received police reports of the rescue of a lady in difficulty in a canoe on Darby Creek and were able to match her name to that of the owner of a vehicle left at Osprey Lake, the start point of her canoe journey. We also found a ‘late vehicle’ at the Pleasant Valley area that night, which is a vehicle at the park after the park closing time. In situations like that, we patrol all the trails in the area searching for the vehicle owners. In this case, we detected a key fob locked in the vehicle. The owner had left the park with other visitors and not reported the car being left to any of our park rangers. The visitor returned to collect the vehicle the next day. Three incidents like that, all in one day, are far from typical, but the sense of satisfaction in facing such challenges is always present and is what I love most about my job.

My favorite Metro Parks activity
I love being outside, taking in fresh air while on a hike, but my favorite activity is fishing. I like the quiet, focused meditation on catching a fish. I’m looking forward to getting to know some of Metro Parks’ many excellent fishing locations.

My favorite Metro Parks story that includes a positive visitor interaction
I’ve had many satisfying interactions with families and kids. Recently, a girl of about 7 or 8 was very excited to talk to me about bats. Her dad had asked me a question about a cavity in a nearby tree. When I said that the tree was a shagbark hickory the girl became very interested and said, ‘Bats live in those trees.’ Then she talked about how much she liked bats and what she had learned about them at school. Interactions like that make very happy memories.

Something to share about creating a positive experience for our visitors
Sometimes you have to tell people that they can’t do something they want to do. But if you can balance that by offering an alternative, it can help to make a positive experience for everyone. As an example, I had to tell a family visiting the park that they had to take down their bouncy house, as it was against the park rules. But I told them the kids could still have a great time in the park. I gave them an alternative activity by offering them a kick ball that we had in storage. The kids did have a great time.

If I could go anywhere in the world and time and money were not a concern…
I’d like to go to Kodiak Island in Alaska for the salmon run and watch bears trying to catch a salmon. I’ve wanted to do that ever since I watched the animated Disney movie, Brother Bear, years ago.

Life news to share
I got married to my beautiful wife, Audrey, in April. And we now think Audrey is pregnant and I’m going to be a dad. I can’t wait to share my love of the outdoors with our child!

Fun facts about me and my family
1. I come from a huge family on my dad’s side. He’s one of 19 kids. I have more than 60 first cousins! We’re from a German Catholic background on my dad’s side. My mom’s side of the family is German and Lithuanian.
2. In 2003, I was the Little Mr Strawberry Pageant winner at the Troy Strawberry Festival. As part of the competition I sang ‘God Bless America’ wearing a big Uncle Sam hat and then officiated as Little Mr Strawberry at various fairs and parades. As many as 150,000 people come to the two days of the Troy Strawberry Festival.
3. I was an Eagle Scout and was part of the Scouts since the age of seven. I worked as a camp counsellor at Summit Bechtel Reserve, a huge scouting camp, where I taught shooting sports. 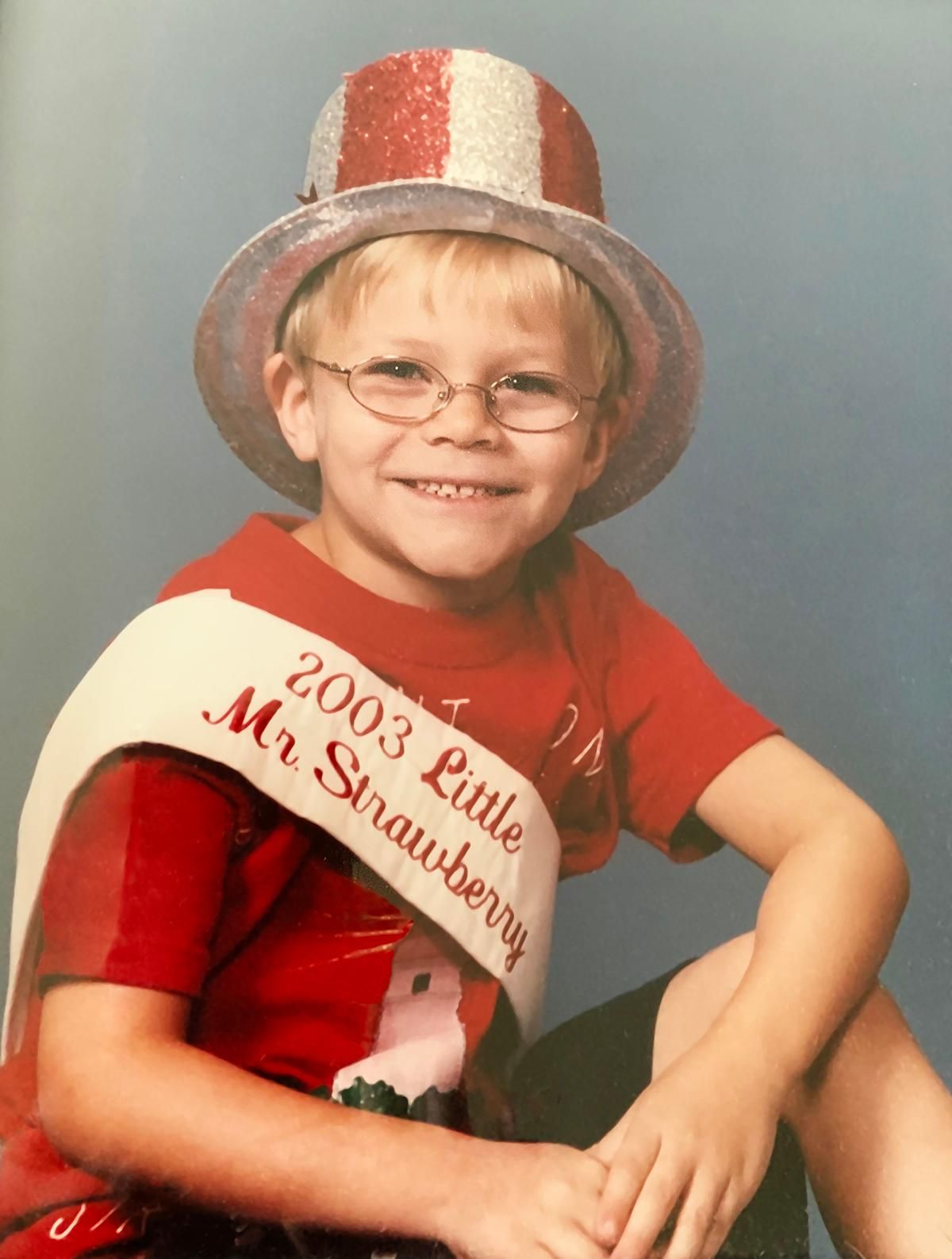 My favorite food and dessert
Strawberries. Plain and simple strawberries. I like nothing better. I like a good steak with sauteed green beans for a meal. But nothing’s better than strawberries!

My favorite entertainment
I’m a huge nerd for playing Magic: The Gathering. It’s a collectible card game and I play at least once a week. I have seven friends who are also nerds for the game and we mostly play against each other. There are thousands of available cards. Players collect together 60 cards as a deck for each individual game. A game can last from as little as five minutes to as much as two hours.

If I had just 60 seconds to share why I love working at Metro Parks, I’d say…
I get to breathe fresh air every day and to make people smile. Plus I get the chance to solve some interesting problems.