As reported in part one of our two-part blog post on Big Red, regular park visitor at Blacklick Woods, Karl Hassel, became obsessed with capturing photos of the legendary beast. He got the shot he wanted in October 2009, but the obsession didn’t end there. Karl continued his pursuit and captured more great photos of the animal, some of which you can see in the photo gallery below. Alongside, on the right, is an earlier photo Karl talked about in part one, taken on a foggy morning when Big Red was in velvet. The fog left Karl dissatisfied with the photo, but it did stimulate his obsession, caused him to start getting up at 5:30 in the morning so he could get to the park as daylight broke.

Later, as Karl proudly showed his photos to staff at Blacklick Woods, doubts were cast as to the identity of his big buck. He was magnificent, everyone agreed, but Park Naturalist Diana Morse showed him a photo she had taken in June 2002 (see first photo in the photo gallery below). This is the animal we called Big Red, or just Red, she told him. In this photo, Red is in velvet and the antlers are still growing. She showed Karl another of her photos of Red, taken in 2006. Comparing Diana’s and Karl’s photos side-by-side, (click the photo below to enlarge) you can see the stark differences in the antlers, and also in the white fur on the chins and necks of the animals.

“So who is my buck?” you can imagine Karl asking.

Kevin Kasnyik, Park Manager at Battelle Darby Creek, who worked at Blacklick Woods in the Big Red era, says there were numerous large bucks living in and around the park from about 2002 to 2010. He says the gene pool probably started in 1999 or 2000 with the original Big Red and one other large buck. (One other large buck — keep that in mind). By 2003, their genes had produced six very-large-antlered deer. “It wasn’t unusual to see several very large bucks hanging out together during mid to late winter,” Kevin says now.

Diana had something to say about Kevin’s “… other large buck.” She believes that Big Red had a brother, “… with similar, but different face markings and antler growth.” Back in 2009, she told Karl that his buck could be Big Red’s brother, but is more likely to be a son of either one. So what was Big Red’s brother called? Here the mystery deepens, as Diana says the two were never seen or photographed together, and people would see one or other of them and call both of them Big Red. So Kevin’s “one other large buck” is unnamed. Just to muddy the waters even more, Diana now believes that her 2006 photo may be of a younger buck than Big Red, but was certainly very closely related to the original, and so it too would be a son of Big Red. She now speaks of her 2006 photo as Big Red II. Karl now talks of his 2009 photo/s as Son of Big Red.

But that isn’t the end of it. Diana says that there were few sightings of the big bucks for a short period after Karl took his photos, and then another younger but similar buck was seen. This became Red III. Although nothing quite as impressive as Big Red and Red II and Brother of Red have been seen at Blacklick Woods recently, the photos in the gallery taken just last year by Doug Ramey and Terry Peck show that big bucks are still roaming the woods and fields. Hmm, maybe these should be called Big Red IV and Big Red V?

Diana adds that, “There are only a few years separating generations, so it is possible to have three or more generations of bucks, sharing similar DNA, running around at once. It made it hard to keep track of who was who. We had a spell of impressive bucks over a period of years, and keeping them straight was a challenge. We were discouraged from naming deer, but we needed some way to identify them, so a few were named. Apart from Red, we had the doe with the very white fur between the toes, which became Tinkle Toes; the button buck with the nasty wound on his face, known as Scarface; and the doe with the bad back leg that leaned on things, named Leaner.”

In 2008, during a boundary check at Blacklick Woods, staff found the shed antlers of what we believe to be the original Red in his later years (see photo in the gallery). Antlers are shed in late winter every year and start growing again almost immediately. They are initially coated in velvet, a vascular skin, which supplies a blood flow with oxygen and nutrients for the growing antlers, or bone. They continue growing until about September, when the velvet is discarded. As well as acting as weapons, the antlers play a major part in sexual selection, attracting does. A former ranger at Blacklick Woods, Scott McPherson, commented on part one of the blog post by recalling that Big Red “…truly was a magnificent animal and sired many offspring over his life.” Both he and his brother must have been potent deer-world Romeos who Blacklick Woods does simply couldn’t resist.

BIG RED (part I) – The Search for a Legend 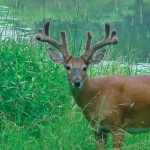 The original Big Red, in velvet, by the nature center pond at Blacklick Woods in June 2002. Diana Morse 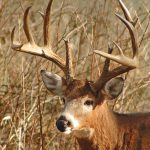 Big Red at Blacklick Woods in winter 2006. But now the photographer thinks it may actually be Big Red II (a son of the great beast). Diana Morse 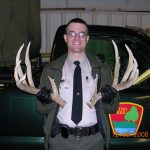 Deer shed their antlers late in the year and this impressive pair are believed to have belonged to the original Big Red. Found in Dec 2008. 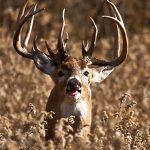 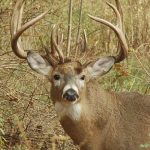 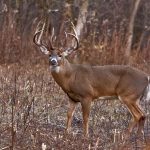 Another of Karl’s 2009 images of his Big Red from his photo obsession days. Karl Hassel 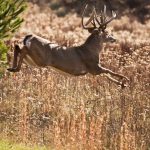 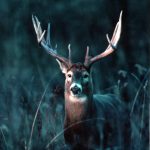 A large buck at Blacklick Woods from the early days of Big Red. Robert Robinson 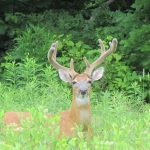 Big buck in velvet, by Doug Ramey. It was taken in June 2015, and may be a distant relative of Big Red. 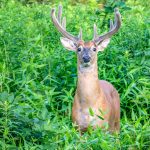 An impressive looking buck at Blacklick Woods. Taken just a year ago, in July 2015, it shows that there may still be some of Big Red’s descendants out there. Terry Peck