You may have heard about our successful reintroduction of northern bobwhite quail at Slate Run Metro Park. Bobwhite quail is a native species that has been struggling in the state due to harsh winters and habitat loss. Metro Parks’ staff began planning a project in 2012 at Slate Run to begin altering the park’s grasslands and forest edges to meet the habitat requirements of quail, with the goal of reintroducing this once plentiful species to the park. Metro Parks incorporated aggressive habitat management techniques into the management of the park’s natural habitats. This has consequently benefited many other species. Scrubby areas and weedy open fields may not look like much to the casual observer, but to quail and other grassland birds and wildlife, it’s home.

After doing some research, Metro Park staff discovered an apparatus that can incubate and protect one-day-old quail chicks for five weeks, with minimal human interaction. This brooding box, called a surrogator, provides the immediate needs of the chicks (food, water, heat) while being surrounded by the habitat they will be released into eventually, with minimal human interaction. After five weeks of living in the surrogator, the adult-sized chicks are released to the wild. They have their wild instincts intact and can survive without human interference. The brushy and weedy areas, enhanced through our management efforts, now provide the shelter and food for the quail.

For the past three years, Slate Run has obtained three groups of approximately 120 chicks, beginning in late spring, to release in the improved habitats of the park. Surrogation begins by placing the box in the part of the park the quail will be introduced. The box has a fuel tank for the heater, a water tank with droppers and a tray for feed. One-day-old chicks are purchased from poultry breeders and delivered overnight to the park. Staff then put the chicks in the surrogator, which protects the quail from predators and extreme weather conditions. The surrogator is checked a couple times a week to make sure food, water and fuel levels are full. As the release date approaches, weather conditions and forecasts are consulted to determine the best time to open the brood box. Preferably, an early morning release, without rain in the forecast, gives the young quail a chance to get used to being outside the box, and to find new food sources, water and shelter in the wild. Initially, they hang around the surrogator, but soon they venture out to explore the park.

Predators often have a great impact on reducing quail chick numbers during these first few weeks after release. Wild born quail also have a high rate of mortality in the first weeks of life. Quail have adapted to the many threats by laying large numbers of eggs, around 12-20 eggs per clutch, and nest at least two or three times per summer. High numbers means a better chance that some will survive. When the cold winter months arrive, quail form coveys to help preserve heat by roosting in circles. An individual bird will not be able to survive the extreme temperatures in winter. This means that the more quail, the higher and healthier the number of birds in a covey. When the winter weather fades into spring, the coveys begin to break up and birds begin to pair up in preparation for breeding season.

After the first summer of releases, we weren’t sure if any quail had survived the summer. However, after the second year of releases, we were able to find coveys and signs of coveys through the winter months. As we were prepping habitat for the third summer of releases, there were birds found breeding on their own. We continued to release more chicks, to help increase genetic diversity and provide a greater number of birds to survive to winter, and beyond. Every spring we conduct a breeding bird survey in the grassland fields of the quail reintroduction area, and have heard territorial males in June. We continue to monitor them throughout the season and have even received reports from neighboring farms hearing and seeing northern bobwhite. This means some are on the move. We have successfully maintained the habitat that they need, but as their numbers increase some bobwhite will move on in search of new habitats and new breeding grounds.

There are varying opinions on the success of pen-raised birds verses surrogated birds released to the wild. Proponents of the surrogation process promote the minimal human interaction with young quail and spending the first five weeks of their lives in the habitat in which they will be released. Surrogating birds allows young quail to experience the sounds and weather from the protection of the brood box. Raising young quail in a farm pen environment, they regularly see people and this may dull their wild instincts. In our experience these past four seasons, surrogated birds act fearful and wary of people and call to one another as they explore the real world.

The importance of habitat

Predators can be a challenge in the first weeks after a release. We have had clever cooper’s hawks that followed the released birds around, slowly picking them off. This is why habitat is so important. The key components of good habitat for quail and other wildlife are food, shelter and water. Shelter from harsh weather and predators can be in the form of high vegetation and young tree stands or brushy areas. Food availability during all times of the year can be accomplished through habitat management practices, including mowing, tilling, planting food plots and making sure there is a diversity of plant species to attract a variety of insects. Water for small animals and bugs is usually available in the food they consume, rainfall and even morning dew.

Historical farming practices allowed quail to be very successful. Extensive systems of brushy fencerows provided travel lanes for quail and other wildlife. These were the days of animal-powered equipment instead of the modern tractors and brush hogs. Farm fence rows used to be full of vegetation, which made pathways for quail to move around in safety and find food in agricultural fields and field edges. Today, most fencerows are kept clean and neat, meaning there is little habitat for quail and other wildlife to travel through without being exposed to predators. Slate Run Living Historical Farm operates like an 1880s farm, primarily using animal-powered equipment and minimal herbicide, which adds to the habitat available to our growing population of northern bobwhite. The farm is a great place to view quail as well as the Bobolink Trail through the Slate Run grasslands. Enjoy a stroll through the southern portion of the park and be taken back in time to when our quail were plentiful. We hope to continue this project, supplementing the now wild population with chicks, as needed. In the future, we will be considering other Metro Parks sites for this project. 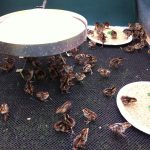 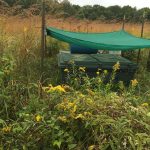 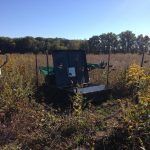 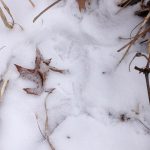