A young at heart couple is proving the adage, sixty is the new forty, with their energetic mission to walk every trail in all 19 Metro Parks. Pat Andrews and Donald Cade Sr, both Golden Buckeye card members, are already two-thirds of the way through their mission. They’re looking forward to seeing more parks in the next few weeks as they adopt their vibrant outpouring of spring colors.

Pat says, “We were both familiar with Blendon Woods, Sharon Woods and Highbanks Metro Parks as they are nearby. We started walking and riding our bikes at these three parks, and learned about all the other parks in the Metro Parks system. The idea of going to every park and walking or biking every one of their trails became a goal for us to work towards completing. We started this journey last year and only have four parks to go.”

Pat continues, “It’s been a great experience for us to spend so much time together in the parks. Alone, in such natural settings, we find more meaningful togetherness. Sometimes we talk about topics that include life, nature or spiritual things. Sometimes, we are just quiet.”

Both Pat and Donald have more time to fill, since taking retirement from their careers in criminal justice. Pat retired after a 30 year career with the Department of Rehabilitation and Correction where she held a variety of positions. In particular, Pat takes a great interest in social issues affecting women. She volunteers twice weekly at the Columbus chapter of Dress for Success, whose mission is to empower women to achieve economic independence by providing a network of support, professional attire and the development tools to help women thrive in work and in life.

A similar passion for Pat involves learning about the culture and lifestyles of other world citizens. As such, she has hosted several international students at her home, one of whom inspired her to take up walking. Pat describes her Norwegian guest, Thea Aspelund Fatnes, as a very “naturally, outdoorsy person,” who stayed with Pat for a full year while completing a biomed masters at Ohio State University.

Since retiring as a lieutenant from The Columbus Division of Police after 32 years of service, Donald remains active serving as a deacon in his church and volunteering in the community. He especially loves spending time with his four grown children, many grandchildren and siblings. He gave his sister and brother-in-law Fitbits, fitness trackers, hoping they would be encouraged to walk more. That hasn’t exactly happened.

Being graduates of OSU, the university holds special memories for both Pat and Donald, although they went there at different times. However, both became involved with the James Cancer Hospital due to unfortunate and painful circumstances, which resulted in the loss of someone significant for each of them. For Donald, it was his wife of 37 years, Roxanne Cade. This prompted his biking the Pelotonia in support of cancer research. In fact, his remembering Pat’s loss motivated him to reach out for her support to help sponsor his ride. That connection laid the foundation for their current relationship.

In addition to hiking and biking, the couple enjoy travelling, eating out, movies and listening to live music. Staying active in life is a priority.

One of Pat’s favorite memories of their trail Odyssey came at Highbanks, and relates to another park visitor they encountered on the Dripping Rock Trail. “A man walked by us, and we stopped him to talk. He was wearing a fascinating T-shirt, with the image of a donut flexing its muscles. It transpired that this man, walking so energetically in the park, was a cancer survivor, who six months before could hardly get out of bed. At the time of the encounter, he was walking five miles a day. He was quite an inspiration for both me and Donald.”

Donald adds, “I have my own memory of Highbanks. We got lost there, after walking to the eagle’s nest. We went the wrong way around a loop and walked seven miles instead of three.” Getting “confused” has happened more than once, but it always enhances the experience. As Donald is fond of saying, “It’ll work out.”

We at Metro Parks hope that Pat and Donald’s story might be an inspiration to many of you readers of this blog post, and that you will also aspire to see as many of our beautiful parks as you can and walk the more than 200 miles of trails in the Metro Parks system. 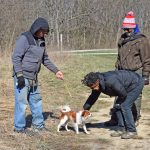 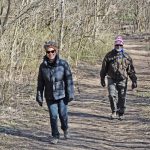 Pat and Donald on the Mingo Trail at Scioto Grove. 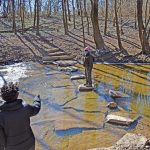 The water level was a little high on the Scioto River, making this stepping-stone river crossing on the Mingo Trail a little too challenging. 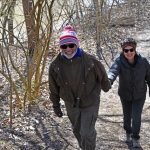 Pat and Donald on the REI River Trail at Scioto Grove.