I remember when I was child my aunt and uncle had so many bats on their farm that my cousins were afraid to play outside in the evening. I loved to go out and watch them hunt around the security light. They have always fascinated me. Now it is much less common to see a bat flying around. When I do see one, I always feel grateful and I am excited when my own children get to see it. Bats are in trouble now and Metro Parks’ staff are doing what we can to help.

For three nights each July the middle of my workday comes right around sunset. If the weather conditions are right (no rain and low wind) my survey partner and I meet at 8pm to get ready to drive our 30-mile bat acoustic monitoring route through the park and surrounding areas. As we drive along, a microphone mounted to the top of our vehicle picks up bat calls while a GPS system tracks our progress. As the bat sounds are captured they are sent to a computer, called an Anabat. The computer analyzes the sounds to determine how many bats the microphone is picking up and to what group of bats the individuals belong. Once the sounds have been analyzed and the location captured, the data is temporarily stored on a handheld computer (PDA) until it can be uploaded for permanent storage. We must drive about 15 miles per hour, so it takes a few hours. To collect comparable data, we drive the same route three different nights each year. 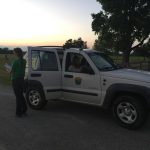 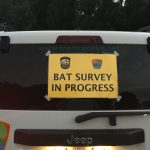 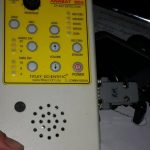 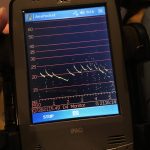 Bat sounds displayed on a PDA 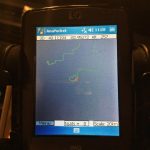 Each night of the survey brings a new adventure. It goes something like this…

8:00 pm  – We meet to start setting up equipment. Sudden stabbing pain. I have been stung by a wasp! OUCH!

8:20 pm  – Arrive at starting point. Find a tick on my clothes. Now we have the creepy crawlies!

8:30 pm  – Begin setting up: Signs go on truck so fellow drivers know why we are driving so slow, PDA gets set up with GPS, Microphone gets attached to roof and Anabat and PDA get attached to microphone.

8:50 pm – Set up went well so we have some time. All we can do is wait to start survey at 30 minutes after sunset.

9:00 pm – Better take a restroom break and get snacks.

9:15 pm – Still waiting. Is this what a stakeout feels like? Probably not.

10:22 pm – Is there an alien spaceship landing in the field next to us?! No, it is just what a field full of nocturnal singing insects sounds like through the Anabat, or so we hope.

10:34 pm – There is an opossum in the road. We have to come to a complete stop to let it pass. Thankfully, it passes and doesn’t play dead!

11:31 pm – Someone failed to stop for that opossum in the road. So sad. They probably don’t know that opossums eat ticks!

12:15 am  – We find a lovely imperial moth at our stopping point. What a nice way to end the night!

Our route is just one of more than 40 acoustic surveys happening in Ohio this time of year. Metro Parks’ resource managers coordinate bat surveys that take place in and around Battelle Darby Creek, Highbanks, Sharon Woods, Clear Creek (my park), and compares data collected each year. The Ohio Division of Wildlife then collects and analyzes survey data taken from the entire state so that overtime, biologists can track population trends.

In Ohio we have 11 species of bats including the endangered Indiana bat. All of our bats are insectivorous, meaning they eat insects. Although bats are not blind, flying around in the dark using vision to find flying food would be a poor hunting strategy. Instead, our bats use echolocation. As they fly along they send out sound waves which bounce back to them. Based on these sound waves the bats can get a clear picture of their surroundings very quickly—quickly enough that they can use the sounds to catch mosquitos and moths on the wing. Bats are the only mammals that can truly fly. Since their food isn’t available in winter, Ohio bats must hibernate. Some species hibernate in trees or even on the ground. Many hibernate in caves.

Why are bats important?

Some people, like myself, just like bats. I think they are fascinating and beautiful. I know not everyone is going to agree with this sentiment and not everyone likes bats, but bats are very important, none the less. They are one of our biggest pest control allies. They eat mosquitoes and agricultural pests. Specific estimates vary, but scientists generally agree that bats provide billions of dollars worth of free, natural pest control each year in the United States. Many nocturnal animals have unfairly been given negative reputations. Bats are no exception. They have historically been blamed for spreading rabies. In fact, it is very rare for a person to get rabies from a bat. Learn more about rabies in Ohio.

Why are we concerned about bats?

Like many species of wildlife in the United States bats have been impacted by habitat loss. Despite this fact, several species had been abundant up until the arrival of White Nose Syndrome (WNS). WNS is a fungus that was first found in 2006 in a cave in upstate New York. Spores from the fungus were likely carried here accidentally from Europe by people who visited caves there, then visited the cave in New York. Since 2006, the fungus has spread quickly and is now found widely throughout the eastern half of the United States. Although the fungus may not affect all bat species, it has devastated the populations of many species including the little brown bat, which previously was our most common bat in Ohio.

The name White Nose Syndrome is due to a white fuzzy looking growth it causes around the nose. The fungus causes the bats to be active during the winter when they should be hibernating and conserving energy. Since food is not available in the winter they quickly run through their energy stores. The fungus can also cause dehydration. WNS has killed entire populations of bats in some places.

What is being done to help bats?

Although scientists are working on cures and education programs, access to many caves has been blocked and the disease continues to spread. This has biologists trying to learn as much as possible about bats and their changing populations. Metro Parks is contributing to this effort.

In addition to our bat acoustic monitoring project, Metro Parks has been tracking bat populations in other ways. We count the bats in structures and trees where they are known to roost. At Clear Creek, we have a bat condo. It looks a little like a treehouse on stilts but instead of a door it has much smaller openings for bats. The condo was originally built to coax a population of little brown bats out of a nearby residence. Each year we visit the condo in the summer and, with the help of volunteers, count the bats as they exit the condo. In just a few years the population has fallen from more than a thousand to barely 100. The residents in the home now tell us that in order to enjoy any time outside in the evening they must use insect repellent. They say that when there were more bats they were never pestered by mosquitoes.

Metro Parks also works with the U.S. Fish and Wildlife Service to do more extensive monitoring using mist nets and other live traps. This helps biologists learn about bats in remote areas, where a driving route is not possible. It also allows more data to be collected regarding the health of the individuals because they are examined closely while being handled.

What can you do to help bats?

There are a few things you can do to help bats. Support Metro Parks’ efforts. Educate your friends and neighbors about the importance of bats. To enrich habitat for bats, you may wish to provide a bat house for neighborhood bats. These can be purchased or you can easily find plans on the internet so that you can build your own.  If you can safely leave dead trees or tree snags on your property you may provide roosting sites for bats. Other things you can do at home include not using outdoor lighting if it is not necessary. Artificial light may change the way bats behave and make them more vulnerable to predators. If you have a problem with bats in your house please educate yourself on safe exclusion methods. There are even reputable professionals who can do this for you. Ohio Wildlife Center, one of Metro Parks’ partners, offers SCRAM! Wildlife Control to safely and humanely evict and exclude wildlife from homes and businesses.

Someone asked me recently if I enjoy doing the acoustic survey. I had to think about it for a moment. Time moves slowly when you are driving 15 miles an hour, for a few hours, only to end up going nowhere. We are out late and I’m always tired the next day. I can’t say that I enjoy it exactly, but I do like being a part of it. I am motivated knowing bats are in trouble and the more we learn about them the better off we, and they, are. It’s not exactly enjoyable but it is rewarding.

Acoustic surveys for 2016 are done. Next summer, if you see a Metro Parks vehicle driving unbelievably slow you will know what we are doing and why we are doing it. Bats need us. And they need you, too!