In late 2009, a bald eagle pair started investigating an abandoned raptor nest within Highbanks Metro Park, along the Olentangy River. They were young birds, by eagle standards, probably about four years old, and this was their first nesting attempt. Though the nest was hard to see, a few dedicated volunteers spent many hours from March to May 2010 monitoring the eagles. They used that old nest to successfully raise an eaglet, but the nest was later damaged in a storm and it seemed likely that they would have to leave.

Luckily, the eagles not only decided to stay at Highbanks, they moved the nest to a new spot that is easier for us to see. It has been fascinating to watch their successes and failures over the years, especially since bald eagles were nearly extinct in Ohio only 40 years ago. Since the ban on DDT spraying, and the restoration of our waterways, bald eagle populations are now stable in the United States.

Our eagles usually start cleaning up the nest in November or December, repositioning branches and getting ready for a new clutch of eggs. They work on it off-and-on throughout the winter while they catch fish in the Olentangy River. Around 90 percent of a bald eagle’s diet is fish, so as long as the river doesn’t freeze, they will stay in the area.

In late February, the eagles lay one, two or three eggs. Since the weather often remains cold through much of March, they must be very careful to keep the eggs from freezing. The two birds take turns sitting on the eggs, usually in two-hour shifts. While one sits, the other hunts.

If everything goes well, the eggs will hatch after about 35 days, which lands right at the beginning of April. We won’t see the eaglets for another 10 days, since the nest is so deep, but when the adults start standing on the edge of the nest and placing bits of food down inside, we know at least one has hatched.

From there, the young eagles grow at an incredible rate, going from a 2-inch egg to a 6-foot wingspan in four months. Once they leave the nest, or fledge, these adolescent birds have only a few weeks to learn how to hunt for themselves before their parents force them out of the area. They must find new territory in order to make room for the next year’s eaglets.

This seems like a simple process: keep the eggs warm, wait until they hatch, feed the babies, and teach them to survive. There are always challenges, though, and some of the young do not survive. If there are three eggs in the nest, survival is especially hard for the third eaglet, who hatches two days after the first. The nestlings are constantly competing for food, and since they grow so fast, a 2-day head start puts the first bird at a distinct advantage. Sometimes there just isn’t enough food to go around, and the third baby starves. Although this seems brutal, eagles have existed for millions of years so it seems to be an effective survival strategy.

When conditions are especially unfavorable, the nest may fail entirely. In 2013, our eagles were observed incubating eggs, but by April, it was clear that they had given up. Without a better view into the nest, it is impossible to say for sure what happened. We assume that the cold weather killed the eggs before they could hatch, but that year is still a mystery. Many were worried that the eagles would leave after failing to produce chicks, but they stuck around, and have been successful ever since. Overall, our eagle pair has produced 13 chicks since arriving at Highbanks, and we have just received word from our volunteers that at least one baby is in the nest as of April 6. We won’t know the true number of babies until they are large enough to pop their heads over the edge of the nest, which should be any day now.

To see our eagles, walk the 2.5-mile Overlook Trail out to the observation deck. If you look north, you will see the nest high in a sycamore tree. Binoculars are recommended, since the nest is about 500 yards away. Alternatively, you could stop by our new section of Highbanks, called River Bluff, which is accessible along State Rt 315, between I-270 and Powell Road (8400 Olentangy River Road). The nest is visible from the parking lot, but again, bring binoculars or a spotting scope. This is also a great opportunity to see the “high banks” that earned this park its name.

As the bald eagle population has increased, they have spread throughout central Ohio. Eagles have been seen at other Metro Parks besides Highbanks, including Pickerington Ponds, Scioto Audubon, Prairie Oaks, Battelle Darby Creek, and Slate Run. Three Creeks has its own bald eagle nest, though it is harder to see than the Highbanks nest.

We hope to see more nests established in our parks in the future, but we must remember that these majestic creatures are fragile. America almost caused the extinction of its own national symbol, and it is too easy for us to change their habitat into something unusable, or to add some chemical to the environment that has unforeseen consequences.

Eagles can be spooked easily, as well, so we must act appropriately around their nests so that they do not abandon their eggs or babies. Also remember that ecosystems are complex and won’t function if pieces are missing, so in order to preserve eagles and other charismatic species, we must protect their habitat and all of the organisms that live there. Metro Parks is committed to this goal so that our children and future generations will be able to enjoy watching these beautiful birds for many years to come. 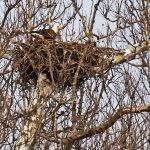 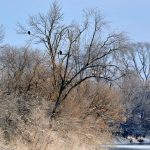 The eagles are back at Highbanks from November each year, as they start rebuilding their nest. (Tom Kitchen) 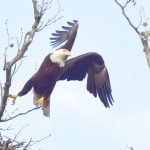 Eagle flying from the nest at Highbanks. (Tom Kitchen) 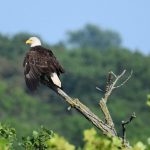 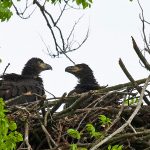 Eaglets, about eight weeks old. (Karl Hassel – from another nesting site in Ohio)