Audubon’s Annual Christmas Bird Count (CBC) has been noting and recording our feathered friends for the last 117 years and is the oldest running Citizen Science Project in America. In a typical year, data is collected by tens of thousands of volunteers across the Americas to help assess the health of bird populations and guide conservation action. Last year, at least in Central Ohio, was far from typical, due to the weather.

Metro Parks has participated in the local counts for many years, but there can’t have been many years that faced such a severe weather challenge. Highbanks, Inniswood and Sharon Woods held their counts on December 17 (they are part of the Hoover Reservoir area that scheduled their count on this day) and encountered dangerously icy conditions on the roads, impacting the number of volunteers who participated.

Environmental Educator Colleen Sharkey, who led the count at Inniswood Metro Gardens, made it safely to the gardens and was joined by a young woman interested in environmental education, and by her ride for the day. The three of them set off on the icy trails, waddling like penguins, according to Colleen, on what proved to be a 2.5-hour adventure. They saw six of the seven species of woodpeckers native to Central Ohio, including a family of red-headed woodpeckers on the Frog Talk Walk, the two adults closely bonding with a juvenile. Another highlight was seeing a red-tailed hawk perched in a tree on Spring Run Trail. They also saw a couple of eastern towhees at the edge of the spruce forest, and finished their count in the comfort of Innis House, where they warmed up with cocoa while counting birds at the feeders and compiling their lists. In all, they saw 21 species and 117 birds at Inniswood.

At Highbanks, seven observers spotted 30 species and 463 birds. The most exciting sightings were a barred owl, bald eagle, two merlins, and two red-headed woodpeckers. Red-headed woodpeckers were also the prize sighting at Sharon Woods. The observers saw two juveniles of a species not seen before at one of the park’s Christmas Bird Counts. Four observers braved the icy conditions and saw 21 species, and 105 birds.

Blendon Woods held their Christmas Bird Count on December 18. The weather was a little better but still icy overnight and also affected the number of participants. Eight observers saw 36 species and 630 birds. Waterfowl numbers were not as high as normal, but the observers saw 110 American black ducks and 83 Canada geese, plus 90 mallards and, more excitingly, four gadwalls.

Glacier Ridge Metro Park also participates in the Audubon Christmas Bird Count, but the park location puts them in the O’Shaughnessy Reservoir count circle (one of six areas for the Columbus counts), and this area’s count is on December 31. Temperatures were much warmer, at 40 degrees fahrenheit, but high winds kept a lot of birds down in the bushes. Thanks to the kinder weather, 33 observers attended the count and saw 40 species and 3,192 birds, including six raptor species—bald eagle, northern harrier, kestrel, plus Cooper’s, red-tailed and sharp-shinned hawks.

Clear Creek Metro Park also participates in a Christmas Bird Count, the Hocking Hills CBC. The Clear Creek count was on December 18 and six observers saw 31 species. The highlight for everyone was the sight of seven sandhill cranes flying over the park. 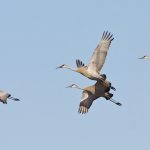 The highlight of the count at Clear Creek was a small flock of sandhill cranes. Photo Dan Ferrin 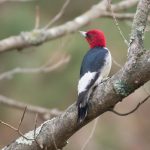 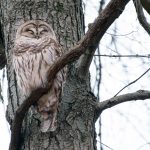 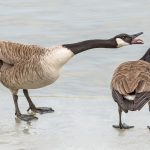 A large number of Canada geese were seen at Thoreau Lake during the Blendon Woods CBC. Photo Gil Sears 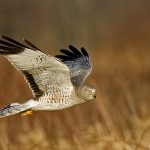 A northern harrier was one of the raptor species seen on on the Glacier Ridge CBC. Photo Kim Graham