Spend a morning, afternoon or even all day hiking some of the trails at Clear Creek Metro Park and discover some of the lush greenery that abounds where the ferns carpet the forest floor. Ferns grow in the dense understory of the mature forests or in the sandy soil or on the sandstone rocks at the 5,260-acre park. They are survivors, living where few other plants do well.

Ferns help prevent soil erosion. Various animals use the fronds or leaves as foods and they offer cover for birds and habitat for tiny insects and some small mammals. Fern fronds provide a place for the larvae of some species of moths and flies rely on the fronds to safely develop. Rolled up tips of Christmas fern are a common sight at Clear Creek. A crambid moth larva will develop inside of the little ball of leaflets.

Around 40 species of ferns have been documented at Clear Creek. Several ferns can be seen on the aptly named Fern Trail. Getting to know these ferns takes a bit of practice but it is a reasonable task and a pleasant way to spend a summer afternoon in the shade.

Some ferns, like Christmas fern and maidenhair fern, are very distinctive and easy to identify. Others, like interrupted fern, are more difficult. To be sure that you are looking at interrupted fern, instead of cinnamon fern, you have to find the “interruptions” of the fertile leaflets on the frond. These fertile leaflets produce the spores, but many times are not present in all fronds.

During the Carboniferous Period, around 300-million years ago, ferns dominated the landscape and were often much larger than the ferns we have today. Once they were shaded out by the rise of flowering trees they evolved to become a surprisingly diverse group of plants. They became very popular in Victorian times, a status symbol of fashion, style and good taste. Victorians collected fern specimens for display and grew them in their homes and gardens. Fern patterns adorned clothing and home furnishings.

It was once believed that fern seeds were invisible and that if you carried a fern seed you could be invisible too. Fern flowers were thought to bring a person a lifetime of good luck or happiness. Why should these types of myths abound over several cultures? The myths probably came about because neither fern seeds nor fern flowers exist. A plant living without seeds or flowers was a mystery. Mystery in nature is where mythology often comes into play.

The answer to the mystery is that ferns reproduce by spores. Fern spores are as tiny as dust particles and they don’t carry much food energy with them. This means that unless a spore lands in just the right place at just the right time it will not be able to grow into a new plant. Fortunately for ferns they often drop billions of spores during their lifetime. Enough of these spores find everything they need for ferns to continue to thrive.

FERN FRITTERS?
Aside from providing a breeding ground for mythology and a fashion craze during Victorian times, what good are ferns to people? Many plant enthusiasts appreciate ferns for their beauty and fascinating life cycle but ferns also have their practical values.

Some people consider ferns a tasty delicacy. These are often called “fiddlehead ferns” but they are not a specific species. Fiddleheads are the spiraling, unfurled young fronds. They are quite beautiful and their taste is often compared to asparagus. Many species have this fiddlehead when their fronds first emerge but the ostrich fern is most commonly eaten in North America. Fiddleheads may be steamed or fried.

Some ferns, such as bracken, are considered carcinogenic. Bracken is a popular Korean food and is apparently safe in reasonable quantities. Certain species are also thought to have curative properties and may be brewed into a tea. Some ferns are grown to remove toxins from air and water. One type, the azolla fern, is used to fix nitrogen so that this nutrient will be available for rice crops.

Fern aficionados can also stop at Inniswood Metro Gardens to see more than 50 species of ferns. Inniswood is a member of the Hardy Fern Foundation. Members of the foundation share their enthusiasm for this fabulous plant, educate others and bring new ferns into cultivation. 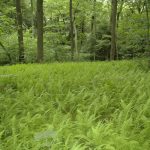 Large swathe of ferns on the Lake Trail at Clear Creek. (Virginia Gordon) 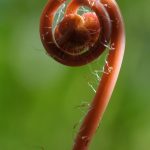 Maidenhead fern in its fiddlehead stage, before the fronds unfurl. (Andrew Boose) 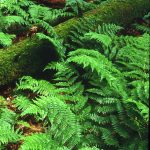 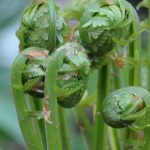 Ostrich fern in the fiddlehead phase, before the fronds unfurl. (Annette Boose) 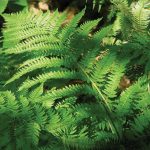