The sun shone brightly on Sharon Woods’ 11-acre Schrock Lake as its recent Friday Night Float program began. Eager canoeists, many of them first-timers, signed-on for a 20-minute float around the tree-lined lake.

Park staff and volunteers helped canoeists into life jackets, guided them into their canoes and pushed them from the launching dock and out onto the lake. One of the first set of people to go out were Doug and Rebecca Smith, from Worthington, with 7-year-old Felicity and 2-year-old Xavier. Although Doug had canoed before, it was a new adventure for Rebecca and the kids, who seemed to thoroughly enjoy the ride. Doug said, “I’m so glad we could enjoy this family experience here at our local park.” The Smiths are regular visitors at both Sharon Woods and Highbanks.

The largest group of canoeists was fronted by Adnan Sharif, who pointed out a number of his friends and family, waiting on the docks ready for their turn. “My cousin Hashim found out about the program from social media. We thought it would be fun for everyone. There are sixteen of us.”

The group of 16, made up of family and friends, are all Sharon Woods regulars, but none of them had canoed before. Some got the hang of it sooner than others. One set of three, to the hilarity of others in the group, found themselves and their canoe turning around in circles. Some friendly advice shouted from the dock had them using their paddles to better effect. Straight-line (or almost straight-line) canoeing quickly followed.

Harvey Austin canoed with his daughters Aja and Casey as the sun began to lower in the sky. Aja and Casey were new to canoeing and very excited to get out on the lake, but they couldn’t persuade their mother Kimberly to join them. Kimberly watched from the shore and took photos. She conceded that it did seem fun, and not at all dangerous, and said she might give it a try next time.

One couple brought their own paddles. Sylvia Neidner’s paddle, of polished wood and bearing a diamond icon and Sylvia’s name, was made for her by her father more than 40 years ago. Both of her parents were canoeists and Sylvia caught the canoeing bug from them. She has paddled our 4-hour canoe trips on Big Darby Creek before, but isn’t able to get outside and get active as often or as easily as she once did. Discovering that she could canoe so much closer to home, the Westerville resident was delighted to be at Schrock Lake. Her partner Nitya, also with his own paddle, saw the program in Parkscope. Nitya is also a member of Friends of Metro Parks.

Darkness began to envelop the lake before Sylvia and Nitya made their way back to shore. Other canoeists were still going out and everyone who signed up got their turn on the lake.

Almost 200 people canoed on the night. We would like to offer our thanks to everyone who came out for one of this year’s canoe programs at Sharon Woods, now in their third year. 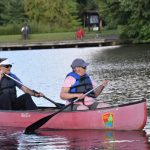 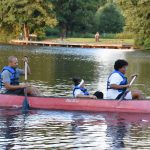 Harvey Austin on Schrock Lake with his daughter Aja and Casey. (Virginia Gordon) 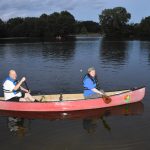 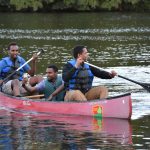 Canoeists on Schrock Lake, as the passenger takes a water-ride selfie. (Virginia Gordon) 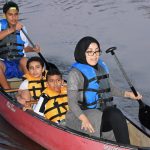 Canoeists return to the dock after a 20-minute float on Schrock Lake. (Virginia Gordon)