UPDATE: June 2017
The Gleasons have changed their schedule and will now head to the Rocky Mountains National Park as the first leg of their trip. SEE VIDEO OF THE GLEASON FAMILY WITH 10TV’s JEFF HOGAN

The Gleasons of Central Ohio have made a family commitment to take a series of adventures this year—but how to get fit for it? Well, the Metro Parks certainly come in handy. The three-stage adventure will begin at the very end of May and early June when the Gleasons head to the Michigan Upper Peninsula and backpack Isle Royale.

Brandy Gleason says that her family has done long hikes before, but backpacking in the wilderness is something quite different. One of the advantages of going to Isle Royale for the first of their backpacking adventures is that “…it has wolves and moose to see and prepare for, but no bears.” As first-time backpackers in the wilderness, bears are definitely not on the Gleason ‘must-see list.’

Brandy and her eight kids—isn’t that a fantastic adventure in itself?—began their training taking long hikes at Highbanks, and have now moved to phase II of the training—hiking with backpacks. The kids, age 9 to 17, will follow the example of their parents, Brandy and Matt, and make the backpacks a little heavier each week, and add more gear. They also hike at Glacier Ridge, Prairie Oaks and Sharon Woods (where Brandy takes some of her kids for “the great Homeschool programs they have there.”) They intend to try out Scioto Grove Metro Park and add it as a regular training spot, and will be doing some of this year’s winter hikes. For variety, and to find rougher terrain, they will also take some hikes at some of the state parks in southern Ohio as the weeks progress.

Matt Gleason is a firefighter and paramedic with a local fire department, and will top up some of his days off with vacation time so the family can make their five or six day tour of Isle Royale. The Gleasons expect to take five of their kids with them on this first leg of the adventure. The second leg is a special one, reserved for Brandy and Matt alone—backpacking in Yosemite National Park later in June to coincide with the couple’s 25th wedding anniversary.

In late August and September, the kids are back with them for the final leg of this year’s Gleason Family Adventure, backpacking in the Rocky Mountains of Colorado. Brandy would prefer to go to Bryce Canyon in Utah, but the kids out-voted her. They will apply for their permits and choose their route through the Rockies on March 1, first day to sign up.

Brandy says that the challenge for first-time family backpackers in the wilderness extends far beyond fitness training, essential as that might be. Having the right gear is equally important, and Brandy has discovered Osprey backpacking gear, cooking devices, tents and more at our local REI stores. Although it’s expensive to kit out a family of ten, Brandy says that “… once a family is geared up, it’s geared up forever.” Another important area of research that Brandy conducted was into water filtration, and the right kind of filters to use in the wilderness. Although some camp sites have water sources, others do not. And treking though the wilderness requires a lot of drinking water.

And then there is the question of food? Some of the kids are picky eaters (nothing new there, eh?), so deciding what foods can best be carried through the wilderness, last long enough to sustain the family through the week-long or even longer treks, and most importantly, foods that will remain palatable or tolerable for the picky eaters and all the rest, is also up for testing.

At the start of this training regimen, the Gleasons face another challenge, a family challenge, as two of the boys are “… not exactly enthusiastic about exercising.” Of course, they wouldn’t get the chance to see the beautiful Rocky Mountains without overcoming that lack of enthusiasm, and they’re beginning to work as hard as the rest of the family at the training. One of the two, Nate, walked with his mom on the Dripping Rock Trail at Highbanks this week, and told her that he had, “A really great time. But don’t let dad know.”

Nate’s 15-year-old sister Rachel says that there are times when she doesn’t feel in the mood to be outside either, but once she gets out on a trail… “I always love it.” Rachel, who is interested in a career in medicine, will be taking an REI map and compass class at Highbanks this weekend with her mom. The pair are also enrolled in an REI two-day certification class for wilderness first aid training in March. As for 12-year-old Sam, he says the compensation for all the hard work of hiking and training is that “I’m out in nature, experiencing God’s miracle.”

In October last year, Brandy and her 17-year-old daughter Hannah went to India on a humanitarian mission, to a place with no hot water and facilities described by Brandy as primitive, certainly in relation to life here in America. As Hannah has type 1 diabetes, there was a little concern for how she would cope with an environment like this. She came through it with no problems, and is now committed to following mom and dad on the trip to Isle Royale.

As another Gleason child, Abigail, age 9, also has type 1 diabetes, and as she insisted on not wanting to be left out of the family adventure, Abigail will be going on the first leg of the adventure in Michigan too. Abbie, a keen gymnastic student, likes to walk ahead on the training hikes. She says it makes her feel like she is in charge and leading an expedition.

Brandy is aware that some people may think it unwise to take diabetic children on a backpacking adventure in the wilderness, but she says they have done the research, consulted medical professionals, and been given the go-ahead. Brandy hopes that their experiences can help other families to overcome similar or other issues and prepare their own family adventures.

The humanitarian trip to India came about through Brandy’s parents. They own Good Steward Books in Milford Center, near Marysville, and have connections with a vacation bible school undertaking missionary work. Brandy says that the experience, working with other missionary volunteers, was hugely rewarding. She and Hannah flew to Hydrabad, followed by a four-hour ride south to a very impoverished area. They helped to feed more than 16,000 kids from a number of surrounding villages during their time there.

The Gleasons are considering adding a fourth stage to the adventure, in March (a pre-adventure you might say)—a 2-day trek to Hazel Creek, near Fontana, in the Smoky Mountains. We’ll keep in touch with them as they continue using the Metro Parks to train for their adventures, and report on their progress during the year. 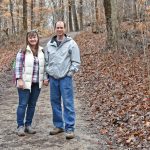 Brandy and Matt Gleason at Highbanks. 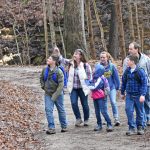 Being out in nature is full of teaching moments for the homeschool Gleason family. 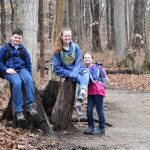 Sam, Rachel and Abbie at Highbanks. 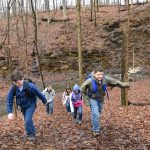 The Gleasons near the Highbanks ravine. 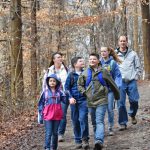 Abbie Gleason leads the way for her family as they hike the Dripping Rock Trail at Highbanks.