Metro Parks educators are always trying to find new ways to engage our park visitors to utilize nature. Several years ago, a few naturalists read an article in the National Association for Interpretation magazine about fairy house programs and events. This seemed like an interesting way to get new visitors to the parks, but some of us wondered whether it would work, whether it might not be a little too cheesy, or whether it would only interest little girls. (“I’m not wearing fairy wings” was uttered by the writer of the blog you are now reading.)

Fortunately, we decided to go ahead, as we have discovered that these programs help to engage both girls and boys of all ages. It activates their imaginations and storytelling abilities, also promotes sharing, and also brings people back to the park to check on their fairy house structures or build new ones.

LEAVE NATURE IN ITS PLACE
The fairy garden craze was just taking off but we wanted to incorporate natural items as opposed to store-bought furniture and accoutrements, as well as to push the concept of leaving nature where it is. Shells make great jacuzzis or bathtubs for fairies, elves or bugs, and bird feathers are wonderful accoutrements for decor inside their houses. Fairy, elf and bug houses would have to be left at the park since, of course, the future inhabitants live at the park. We decided to try the idea and programs were planned for the spring at Sharon Woods and autumn at Slate Run Metro parks.

THE GREEN ENEMY
The magazine article included an interesting idea: a Fairy Store in which program participants could buy specialty items such as seed pods and grape vine tendrils using wooden tokens. We decided that was wasteful (we would have to buy the tokens) and that the form of money would be garlic mustard and honeysuckle—both highly invasive aliens that are taking over eastern forests. An odd concept, but when items in the Fairy Store are priced by the stem or plant, you need to have the correct currency. The children could pay, for example, two garlic mustard plants, roots and all, for a piece of snakeskin. This would become a great way to combine invasive plant removal with the fantastic fun of creating your own house for your favorite fairy, elf or bug.

The first program was held at Sharon Woods and was wildly successful. An autumn fairy and elf house program was equally successful at Slate Run (minus the invasive plant removal.) In recent years, over 100 people have attended this same kind of program at Blendon Woods too.

A truckload of garlic mustard was removed during that first program at Sharon Woods. Over the years, the progress of garlic mustard removal in the park’s natural play area is visible. During the hunt for garlic mustard, the children can find items for their houses—cool rocks, an interesting piece of fungi, or a section of tree bark. They place their garlic mustard and honeysuckle in piles, like money in their own personal bank.

The Fairy Store opened and children haggled with naturalists about the cost of items. Although sometimes difficult to choose, the Fairy Store was only open for a short time before children needed to head out into the woods or picnic area to start building their fairy or elf house. (A naturalist or volunteer is in charge of the Fairy Store in case there are any spur-of-the-moment needs for a pinecone or flower seedpod.)

TOUR TIME
After construction, the children are always excited to give a tour of their works of art. As mentioned, this encourages imagination and storytelling. Other children join in to see what creations were made all over the natural play area.

The great thing about fairy, elf and bug houses is that they can be built anywhere. These creatures live in any habitat—a city backyard, a park or a back porch. Grownups: Please remember that our natural play areas are open any time the park is open. You don’t have to attend a Metro Parks education program to build one of these cool structures for a fairy or elf. And bugs, well, they like to live in fairy or elf houses too. Send photos of your house-building adventures to info@metroparks.net 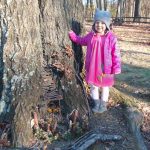 Girl stands proudly by her fairy and elf house in the natural play area at Blendon Woods. (Andrea Krava) 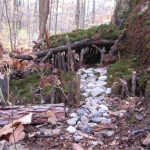 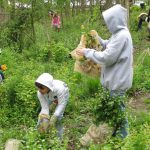 Kids collect invasive garlic mustard to use as currency to buy building materials for fairy and elf houses. (Allison Shaw) 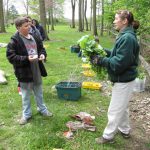 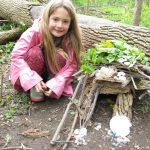 Girls at her fairy/elf house in the natural play area at Sharon Woods. (Allison Shaw) 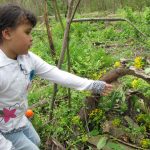 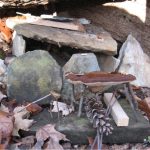