Home The Metro Parks Blog How to grow a butterfly

It’s that time of year when monarch butterflies begin their magical migration south to the mountains of Mexico, where they’ll spend the winter.

I’ve been seeing monarch butterflies in the parks, and as I drive along the highways to and from work, and around Ohio. The adult butterflies, which have been alive for less than a couple of weeks, are making a journey south to a place that they’ve never been to.

Their parents have never been to Mexico, and their grandparents haven’t either. Their great-grandparents were likely there nearly a year ago. How “our” monarchs figure out how to get to Mexico, and how that information is passed on through several generations of monarchs is quite a mystery and is being researched.

Here at Blendon Woods, we focus on getting those monarchs ready for their big migration and help raise the generation that does migrate, as well as ones before that do not migrate. We hold a celebration every year – Monarch Weekend – to help visitors learn more about monarchs and what we can do to protect them as their population numbers have dwindled over the past two decades. (Monarch Weekend at Blendon Woods Metro Park, Sept 2 and 3, 2017, from 1-5pm)

Monarch butterflies lay very distinct eggs, and only on milkweed plants. The eggs are not much bigger than a pin head, and are cream colored. They’re usually laid on the bottom of milkweed leaves to protect them from the weather (sun could dry them out, rain could make them too wet). A female can lay 200-500 eggs. Up close, you can see the details of a monarch egg—pointy at one end with ridges or stripes going from one end to the other.

CATERPILLARS
Monarchs lay their eggs only on milkweed plants as monarch caterpillars will only eat milkweed. For about two weeks straight, they munch on milkweed and grow 200-times their birth weight.

At Blendon Woods, we feed caterpillars in two ways. Some roam free on milkweed we have planted in our Monarch Mansion butterfly tent. Others are raised in shoebox sized containers in the nature center, and given milkweed leaves from around the park. Keeping the caterpillars in a few separate populations helps prevent the spread of disease and gives us multiple options to show them off to visitors.

Before a caterpillar becomes a butterfly, it goes through a pupa phase, also called a chrysalis. Forming a chrysalis is a strange procedure, as the caterpillar hangs upside down, sheds its skin, and then its insides turn into a somewhat hard shell that eventually becomes the outside of the chrysalis. Then the butterfly forms inside. Many people think that monarch chrysalises look like jewels because they have beautiful gold dots and lines, which have actually been found to provide pigment to the butterflies growing inside.

BUTTERFLY
After about 12 days as a chrysalis, the monarch butterfly emerges. It can’t fly right away, since it has to uncurl, stretch out and gain energy. After a few hours, the butterfly begins to wiggle its wings and can fly off. During this stage, butterflies need plenty of flowering plants (native plants are best and they don’t have to be milkweeds) so they can sip nectar.

PROTECTION
Monarch butterflies are well recognized by most people. Their population is in trouble, though, due to lack of habitat both in Mexico and right here in the Midwest. Oyamel fir trees in Mexico, which monarchs hibernate in, are being cut down at an alarming rate.

Milkweed throughout the eastern and central United States is being replaced with roads, buildings, and dying off due to herbicides. If you’d like to help monarchs, the first step is to raise milkweed. There are a few varieties that do well in Central Ohio, such as common milkweed (generally grown wild), swamp milkweed, and butterfly weed (both sold in nurseries). You may come across other varieties such as purple milkweed, tropical milkweed, or even sandvine. Plant it and they will come.

And we hope you come to Monarch Weekend at Blendon Woods Metro Park, September 2 and 3 from 1-5pm. 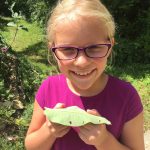 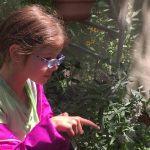 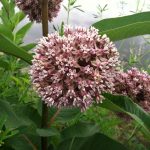 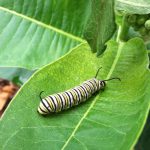 MORE ABOUT MONARCHS AT THE METRO PARKS

At Walnut Woods, staff have been seeing caterpillars and chrysalises on milkweed in the fields. 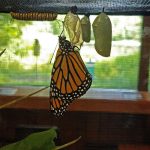 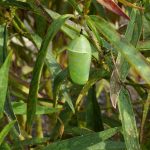 Monarch chrysalis in the fields at Walnut Woods. (Mindi McConnell) 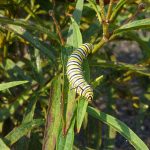 Monarch caterpillar on milkweed in the fields at Walnut Woods. (Mindi McConnell)