Home The Metro Parks Blog The importance and beauty of forests

A summer walk in the cool green forests at any of your 19 Metro Parks will inspire your imagination and stir your senses. Forests are the centerpiece of most parks, from streamside or riparian forests of towering sycamores and gnarly box elders to the dry ridge-top forests of mountain laurel and chestnut oak.

A forest is much more than a collection of trees. Our forests are also nature’s air filters. According to the American Forestry Association, an acre of trees uses about 2.6 tons of carbon dioxide per year and provides life-sustaining oxygen.

Metro Parks’ forests are an ever-changing home for countless species of insects, amphibians, reptiles, birds and mammals. Change in the forest sometimes takes place slowly over the course of decades, such as when a big old tree begins to die. It slowly creates a clearing for the sunlight to reach the once shaded forest floor.

This allows another tree to inch its way through the canopy. There it will take its place as a dominant tree until it also begins to die and the cycle continues. Other times, major change happens in a matter of hours. A huge number of park trees lost most of their branches in a devastating ice storm we suffered little more than a decade ago.

A bad thing, and yet this devastation created an abundance of sunlight for large areas of the forest floor, called forest gaps. In turn, hundreds if not thousands of seedlings per hundred square feet began to make a mad dash in competition for sunlight and water. This competition can last for 15 to 20 years. The trees that survives competition, storms, insects and disease take their place in the canopy as dominant trees and become part of the never-ending cycle of forest regeneration.

At Glacier Ridge, Battelle Darby Creek and Pickerington Ponds, reforestation has helped to restore the vernal pools that disappeared with agriculture and farming. Shade from the trees reduces evaporation and keeps the water in the pools long enough to create temporary homes for the eggs of many amphibians such as Jefferson salamanders, spotted salamanders, spring peepers, chorus frogs and wood frogs. Box turtles also frequent these pools.

Mid-succession is the stage from around 15 to 25 years. Tree species such as silver maple, honey locust and elm are common in this stage. Birds such as chickadees, titmice and grouse move in. The late stage of succession starts at around 25 years. This stage is where dominant trees take their places in the canopy, with a layer of shade tolerant shrubs below, such as spicebush, witch hazel and black haw.

The riparian forest grows in the wide floodplains of rivers and large creeks and is crucial to the health of these streams. Tree roots hold the loose floodplain soil in place while canopies break up raindrops and help prevent flooding in heavy rains by storing part of the rainfall on the leaves and branches. Leaves also shade and cool the water in summer.

This in turn helps to keep oxygen levels in the stream high enough to sustain fish, mussels and aquatic insects. These shade trees are some of the biggest in the parks, such as giant sycamores, towering cottonwoods and spreading box elders.

Metro Parks’ forests are full of variety and change and offer endless miles of winding trails for you to enjoy a walk in the woods any day of the year. Whether you explore the woods alone or join in a guided walk by a naturalist, the forests are a place to indulge your imagination and discover the outdoors. 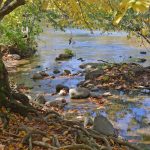 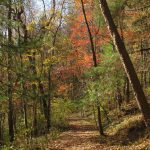 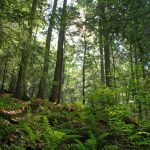 Trees and ferns off the Hemlock Trail at Clear Creek. (Andrew Boose) 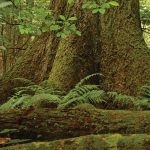 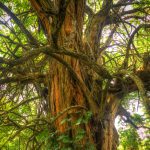