Home The Metro Parks Blog Let There Be Soup

Winter hikers at Blendon Woods have been relishing and praising the park’s chicken noodle soup for years, and many have asked, or even pleaded, for the recipe. That, I’m afraid, remains a closely guarded secret. For 12 years now, the soup has been made by the same pair of dedicated soupers, Blendon Woods Assistant Park Manager Brett Berisford, and his fellow souper Kurt Fortman. Kurt is so committed to maintaining the delicious excellence of the Blendon Woods soup that he continues to be the co-chef, even though he hasn’t worked at Blendon Woods for more than two years. Kurt is now the assistant manager at Prairie Oaks Metro Park.

Although this blogger dare not reveal the secret ingredients of the soup (for fear of being used as an ingredient in some other kind of soup, as punishment), I can reveal what server, volunteer Joy Dunno, describes as the real secret of the soup’s popularity.

“We always add a biscuit to the bottom of the bowl and serve the soup on top of the biscuit. It’s a perfect combination.”

Fellow soup server, park technician Jean Wongrowsky, adds that, “A very small number of people ask us not to put the biscuit in the bowl. They really don’t know what they’re missing.”

The ingredients
Preparation for the chicken noodle soup begins the week before the winter hike, with purchase of ingredients. That includes 20lbs of carrots and celery, and 10lbs of onions. We buy 12 large bags of wide egg noodles, 80 ounces each, 15 cans of pulled chicken, 48 ounces each, and 70 cans of chicken broth, 49 ounces each. The pulled chicken and the broth are in the same volume size cans. I would have thought chicken would be heavier than broth, but that shows what this blogger knows! That extra one ounce of broth might make all the difference, but I’m guessing not. And then, added to all this, are the secret ingredients.

“Brett and I tweaked the recipe a little when we took over making the soup 12 years ago,” Kurt said, while spooning chicken into an already bubbling six gallon drum of soup. “That will remain our secret.” Kurt had a mysterious smile on his lips and sounded rather like a dedicated souper for life.

That’s a lot of soup
They make 10 drums of the soup, each drum taking about 45 to 50 minutes of cooking before the noodles are added for the last few minutes. It’s all timed, so that the first bowls of soup can be served at 10:45am, following the official start time of the hike, 10am. (A number of people start the hikes early these days, perhaps wanting to be first in the queue for soup). When the first delivery of soup is poured from the drums into large serving pots, buttermilk biscuits are ready to be transported with the soup by van, from the soup kitchen (at the maintenance shop), to the serving tents at the Cherry Ridge Picnic Area. We heat 720 buttermilk biscuits, to go with the soup.

Hot drinks are also served at the hike. The park makes six gallons of coffee, but far more popular than this is the hot cocoa, and we serve about 40 gallons of this. It’s rich and chocolatey and makes the perfect aperitif on a cold day.

You can’t beat hot soup on a cold day
In fact, it was a bitterly cold day at this year’s Blendon Woods Winter Hike, with temperatures in the lower 20s. We had more than 1300 hikers, all bundled up to the max, and four Franklin County Sheriff’s Deputies patrolled the trails on horseback, much to the delight of hikers. At the end of the hike, lines queued to get to the soup, which proved as popular as always, although one or two people did inquire again about the recipe and the secret ingredients. This blogger could only say, truthfully enough, that the recipe remained a secret even to her.

The next two Winter Hikes will have their own special menu to entice you. At Highbanks, at 10am on Sat February 11, don’t miss the hot potato soup and biscuits, plus coffee, chocolate or tea. The following day, at 2pm, Glacier Ridge will be serving hundreds of hot shredded chicken sandwiches (yummy), with a bag of chips, plus hot chocolate.

Staff and volunteers will be involved in the cooking and serving. We really couldn’t make our winter hikes so special for our visitors without the wonderful support of our many volunteers. We salute them for everything they do. 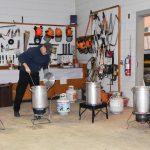 Kurt Fortman stirs the chicken noodle soup in a number of the six-gallon drums used for cooking. 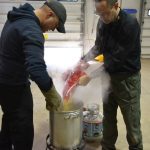 Noodles are added to the soup for the last three or four minutes of cooking. 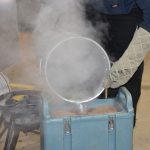 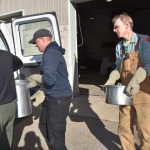 Time to transport the soup from the kitchen to the serving tent. 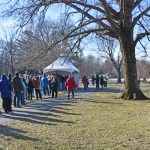 Line starts here. Hikers get in line for their chicken noodle soup and buttermilk biscuit. 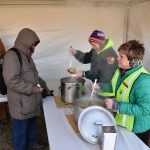 The secret is the soup served over the buttermilk biscuit. 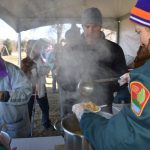 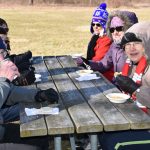 The soup seemed to be as popular as ever with everyone. 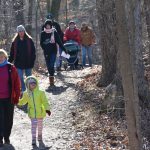 Let me get at that soup! Hikers coming off the trail in the Cherry Ridge Picnic Area. 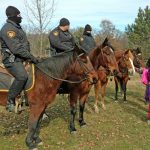