This pin oak in the Meadows Picnic Area at Blacklick Woods suffered a lightning strike in the Monday morning storm.

Sap and water beneath the bark of trees is a better conductor of electricity than air, so when lightning struck the pin oak, the tremendous charge would have instantly superheated the sap, or sugars, being taken to the roots via the xylem, and also the water, being carried to the leaves by the phloem. The superheating boiled the sap and water instantly and created an explosive pressure and a shockwave that blew the bark from the tree. We have placed a bright green interpretive sign close to the tree, so you can identify where the tree is on your next visit to the park, and read about it. The tree is about 35-feet high. It already stood in the park when it opened in 1948, but was originally in the buttonbush swamp area. It was transplanted in the picnic area in the early years after the opening and has stood there ever since.

Whether the tree can survive the damage is debatable, but the next two weeks are key. If the leaves turns brown in that period, we know it won’t survive and we’ll remove the tree for public safety. That is standard procedure for dead trees in picnic areas, or other open spaces.

There’s a chance that the leaves won’t brown in the next two weeks, in which case we’ll let the tree stand and monitor it next spring to see how well it leafs out. That will be a judgement call by our tree experts, but if the leaf-out is poor we’ll likely remove the tree then.

It’s not all doom and gloom though. Our forest ecologist, Andrew Boose, says he has seen trees suffer this amount of damage and survive. And Blacklick Woods has an example of just such a case. Another pin oak was struck by lightning last year, in the Ash Grove Picnic Area, and suffered very similar damage. Although badly scarred, that tree is doing well this year.

Incidents like this are a good reminder that we should never shelter under a tree during an electrical storm. Trees, standing so tall, act as lightning rods and are dangerous places to stand. The safest place to shelter is in a vehicle, where the rubber wheels insulate you from the effects of any lightning strike. 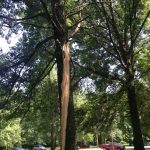 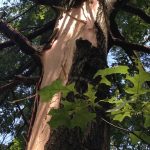 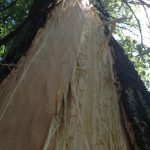