Home The Metro Parks Blog To manage, or not to manage? That is the question…

Metro Parks manages many areas to control succession of plants.  If managed in a “hands-off” manner, all of the park areas would progress through several phases of plant growth beginning with grass and wildflower fields, to brush and briars, to young trees and then, in 75-100 years, begin its final stage as a mature forest.  Within each habitat phase, one may find a group of wildlife species that prefers that habitat while others may tend to be less specific in their habitat preferences and may inhabit several stages of succession.

Some species, such as butterflies, are dependent upon the presence or absence of larval food plants and adult nectar sources.  Oftentimes, the larval stage may be found in different habitat than the adult nectar source.  At Prairie Oaks, there are four species of butterflies that depend upon a plant known as the lake sedge (Carex lacustris) for its larval food source.  Lake sedge requires moist to shallow standing water and open sunny areas.  In this case, to manage for the butterfly, the plan requires managing for the host plant that requires nearly full sun.  To provide this, small trees must be removed from the area by mowing, cutting and possibly treating the stumps with herbicide.  This will need to be regularly maintained every 2-4 years for the host plant and ultimately the butterflies to survive.  While removing the small trees and shrubs does eliminate habitat for some species, resource managers often have to make decisions that tend to favor one group over another.

At Prairie Oaks, Metro Parks is managing an area that contains four species of butterflies found nowhere else in Franklin County, and this type of management direction is important to protect the overall natural history and native species of Central Ohio.

The most common of Ohio’s large sedge feeding skippers, the dion skipper inhabits a variety of open wetland habitats including sedge meadows and even ditch lines that contain lake sedge and other possible larva food plants.  Statewide it is considered an uncommon species mostly found in the north and northwestern portions of Ohio.  Franklin County has one known population.  The adults will use a variety of wetland plants, including milkweeds, for nectar sources.  It may be found flying from mid-June to early August.  Underside of hindwing is red-brown or orange-brown with two yellow-orange streaks running from the base to the margins.

Similar to and often found in association with the dion skipper, Duke’s skipper is not as common as dion however still considered uncommon throughout northern Ohio.  Where dion skippers prefer open sunny meadows, Duke’s is usually found along the shrubby, shaded edges of wetlands containing lake sedge.  Duke’s flight period is from the latter half of June to the middle of August.  The upperside of the hindwing is sooty black, while the underside is pale brown with a yellow streak. The male forewing has a stigma and the female forewing has a few pale spots.

The family of satyr butterflies is well represented in Ohio by several species, but this is one of the less common members of the family.  It occupies fairly shaded edges and even forested wetland areas with good populations of lake sedge (Carex lacustris).  It is often found in association with Duke’s and dion skippers, but rarely ventures away from the shaded areas as it flies low to the ground, suddenly stopping to perch in the shadows.  It has a flight period that extends most of the summer from early June to late August.  The underside of the hindwing shows an eye spot with a “wavy line” that is used to identify it.

This small brown butterfly ranges across the western half of Ohio in very localized situations but is generally found near sedge meadows, fields and roadsides that border oak forests containing swamp white oak (Quercus bicolor).  One of its preferred nectar sources is the common plant Indian hemp (Apocynum cannabinum).  It typically flies from early June to early July, spending small periods of time feeding then returning to nearby tree tops for the majority of the day.  Best identified as a mostly brown butterfly with an underside that is brownish gray, the blue tailspot has a narrow orange cap, and there is a white-edged black post-median line with a “W” at the inner margin. 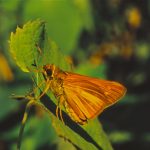 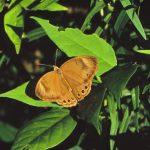 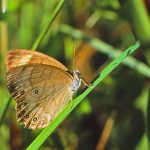 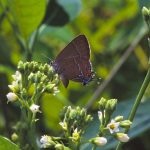