The call of the wild and the open spaces of nature have always had a powerful allure for one out-of-state resident, who visits family in Central Ohio at least three times a year.

Jennifer Thorsen can’t keep away from the Metro Parks when she’s here (despite her parents’ objections). Jenny, age 37, lives in St Charles, Illinois, and says, “Running and nature are great passions of mine. The Metro Parks are fantastic places to satisfy both passions. Whenever I come home to visit my parents, I spend lots of time in the parks.”

Jenny’s parents live in Dublin, and have been known to complain that Jenny spends far more time in the parks than she does with them. And Jenny readily admits that this might appear true for her parents. But when your dream for 2017 is to compete in both the Mohican 50 Miler race in Loudonville in June, and the 50-kilometer Barkley Fall Classic in Tennessee in September, that requires “… a lot of time and commitment. I’ve run into issues with my family being angry when I visit because I don’t stop training when I’m there, but the Metro Parks have been great to help me share my passion with them.”

A visit last fall proved particularly thorny. Jenny had met up with a running friend of hers to do a 10-mile run at Clear Creek, followed by a 6-mile run at Highbanks. Her parents wanted to clear the air, get an explanation of why spending so much time in the parks was so important to their daughter. Beyond the training needs that were so necessary for Jenny if she was going to be fit enough to compete in the big upcoming races, Jenny tried to explain how being in the parks, experiencing the tranquility and beauty of nature, was inspiring and spiritually uplifting to her.

It led to something of a beautiful rapprochement last Christmas. When Jenny arrived with her husband and kids for her Christmas visit, mom asked if she could come to the park too and dad surprised her by saying he had bought himself a pair of hiking boots. Jenny took mom and dad with her to Highbanks on a hiking trip and they “quickly fell in love with the place.”

That makes three generations of the family that now love the Metro Parks. Jenny’s daughters Aria, age 10, and Allegra, age 7, enjoy hiking at Highbanks too, and especially playing in the creek. They always come down to Central Ohio for the family trips and Jenny takes them to a park two or three times each trip, separate from her training runs. Aria found a beautifully preserved fossil by the stream bed in the ravine last year, which she and the family took to the nature center.

Jenny’s running friend, Nikhil Shah, is someone she friended first on Facebook, about two years ago. Nikhil, who lives in Columbus, uses the Metro Parks too, training for very long races such as the Fat Dog 120 Miler in British Columbia, and the Cruel Jewel 100 Miler in Georgia. Jenny had posted a question about trails to run on in Ohio and Nikhil replied. They now get together for a run every time Jenny comes to Ohio.

Although running is clearly of great import in Jenny’s life, it has also caused numerous injuries and contributed lots of pain. And still she’s committed to the two big races this year.

Jenny says, “I had surgery for a torn labrum and impingement in my hip in 2015. They shaved down the bone that caused the tear and put an anchor in my hip to reattach the cartilage. Problems were discovered in my spine too. Some bones there tend to shift and pinch nerves. When it’s really bad I can barely walk and usually need a stick to support me until the bones shift back.”

“To combat it, I’ve had a couple of cortisone injections in my spine, physical therapy, try to stay as fit as possible, do a lot of cross training instead of running to minimize the impact on my spine. I very rarely take painkillers, even when the pain is really bad. I’ve also switched what I do. I used to do a lot of flat, fast road races, but now they cause my hip and back too much pain. So I switched to trail and mountain races as they seem to be easier on my body and I enjoy them more.”

Ah, so a couple of ultramarathons, that’s easy-peasy then?

Another love of Jenny’s is climbing. She used to buy a day pass to Vertical Adventures to satisfy her interest, but this was expensive, and this was before she discovered the outdoor climbing wall at Scioto Audubon Metro Park. Aria and Allegra have developed their own passion for Scioto Audubon and love the bouldering there, which kids can climb, and also the playground and 9-station obstacle course. And it’s all free. So now the Thorsens always sneak in a trip to Scioto Audubon on their family visits as well.

Good luck with the races this summer, and enjoy the parks with your family. 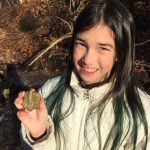 Jenny’s eldest daughter, Aria, with a fossil found at Highbanks. 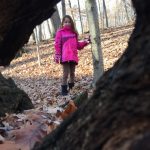 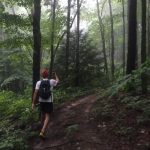