After more than 30 years, the time had come to pack up and move a honey bee colony from Walnut Woods Metro Park to Battelle Darby Creek. The eviction notice came when park manager, Mindi McConnell determined that the structure they were living in was scheduled to be demolished. The bees had professional help with their move. Naturalists Debbie Ruppersburg and Kaylin Callander from Battelle Darby Creek, along with Rod Pritchard, president of Central Ohio Beekeepers Association, were able to carefully extract all of the brood (baby worker bees) and many of the adults along with five queen cells. The colony was split to accommodate as many of the queen cells as possible. These nucs, or nucleus colonies, that the hive was split into will be used to help move Battelle Darby Creek Metro Park’s current honey bee colonies forward. This could be by helping to strengthen a weak hive or to help supply a colony with a new queen. Because this particular colony seems very hardy, we want those excellent genes to continue to be passed on to more generations.

The colony spanned 32 inches wide and nearly 8 feet tall. Any cracks or gaps that existed were filled with propolis, a dark red or brown resinous substance that the bees collected from nearby tree buds. This “bee glue” could be seen all around the entrance to the hive as well as in between the pieces of siding. As the wood was torn away the colony was revealed; a giant labyrinth of bees and comb!

Comb is made when a worker bee secretes a waxy substance from the underside of their abdomen. As they draw out the comb, they create small hexagonal pockets or cells. Cells inside of a hive hold many things. They hold honey, and until they put the lid on the cell you can see the shiny liquid inside. Capped honey has a light cream-colored wax covering on top to store the honey for food later. Bees live through the winter unlike some other social insects, so they have to store enough honey to prevent starvation during the cold months. Cells also store pollen. Different colors of pollen from a variety of plants almost look like stained glass within the comb. This pollen is collected to help feed the hive a substance called ‘bee bread.’ The cells also hold the eggs and larvae of the bees as they grow. This brood is capped with a slightly darker wax than the honey. Queen cells are longer and larger than other brood cells. The colony decides if they need a new queen and will start feeding a larva a special, very rich food called ‘royal jelly’ and builds the cell to accommodate her. (By Kaylin Callander, Naturalist at Battelle Darby Creek)

Learn more about honey bees and other native pollinators throughout the summer and fall at your Metro Parks:

Preschoolers: All About Pollinators – June 16th @10am

Preschoolers: All About Pollinators – June 7th @10am 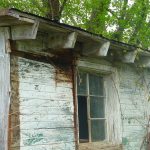 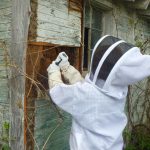 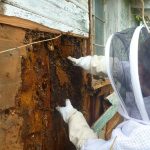 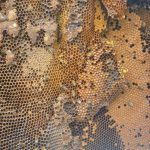 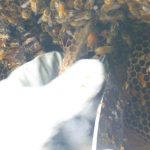