Home The Metro Parks Blog New life is here now, but the Farm’s heritage breeds cement a bridge to the past

Spring is the beginning of the new farming year, when the gardens and fields are being planted. It is also the time when we have the most animal births, specifically our sheep, cattle and hogs.

As Slate Run is a Living Historical Farm, we do things the 1880s way. It means that our animals are heritage breeds, which can be loosely defined as breeds of animal that were popular in the past but has fallen out of use in most agricultural areas today. New-born livestock are wonderful animals to see, always popular with kids and families, but beyond the fun factor, our animals play an important role in conservation and help to maintain genetic diversity, which is vital for the future health of these heritage breeds.

We have three main heritage breeds at the Farm—Shorthorn cattle, Poland China hogs, and Merino/Southdown sheep.

Shorthorn cattle
Shorthorn cattle were the most popular type of cattle raised in Ohio in the 1880s. They were dual-purpose cattle, being excellent as beef cattle and also good as milking cows. Farmers today must specialize either in beef or dairy to be profitable, which means dual-use cattle like the Shorthorn are no longer widely farmed. Other breeds have been developed that are better as beef producers, or better as dairy producers, but not both.

Poland China hogs
Poland China hogs have a long history here in Ohio. The breed was developed here in the mid-1810s and spread in popularity across the country. Poland Chinas are an excellent variety of hog since it provides both good quality meat and very good lard. Lard was very important in the 1880s since it was used in cooking, baking and soap making among other uses. Poland Chinas are still farmed today, but they have been bred to be leaner than their 1880s counterparts, since lard is not as important to us now.

We farm two types of sheep that have bred together, Merinos and Southdowns. Merino sheep were popular in the 1880s and remain so today for the same reason; they produce very fine wool which does not itch and is great for clothing such as shirts, socks and pants.

Merinos were selectively bred over the years to not only produce a high quality of wool but also to maximize the volume of wool produced. This was accomplished by breeding Merinos with sheep that have excess skin, resulting in offspring that have more area for wool to grow on. Modern Merinos have a smoother skin than the older Merinos, to allow for quicker shearing of the sheep. We have been able to procure some of the older style Merino sheep to keep that genetic variety going.

Southdown sheep are farmed for the quality of their meat. Back in the 1880s, farmers made more money from the wool of a sheep than from its meat, which is why Merinos were so important. Southdowns were farmed here in the 19th century, but as they weren’t as profitable to the farmer, fewer of them were kept.

Shorthorn cattle, Poland China hogs, and Merino/Southdown sheep are all still around but as stated above they are either not as popular today or have changed genetically from the variety popular during the 1880s.

When you come to the Farm and see a calf, piglet, or lamb, you are also seeing the continuation of a breed that was very important to our forefathers here in Ohio, and is important to us now in continuing their existence as living history. Keeping these animals also helps to maintain genetic diversity in breeds, which helps to insure that the breed will continue in case a new disease develops. So the next time you come out to visit us and see the animals, take a minute to think about this, that we are not only preserving the history of the buildings on the farm but also the history of these animals by continuing the bloodline of these specific breeds. 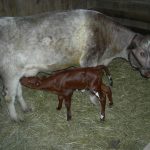 Cow and calf nursing at the Farm. (Farm photo) 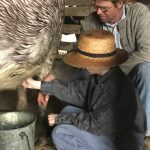 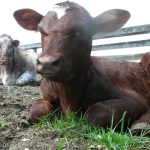 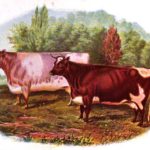 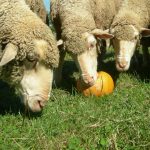 A Merino sheep munches on a pumpkin. (Farm photo) 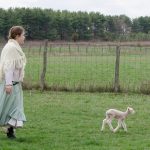 A Farm interpretive aide follows the progress of a very small but leggy lamb at Slate Run Farm. (John Cagnina) 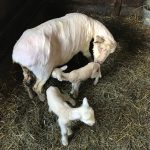 A newly sheared Merino sheep with her babies. (Farm photo) 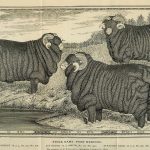 Merino sheep from the farming manual. 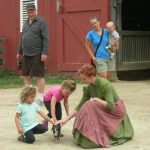 A baby piglet is the center of attention outside the barn, (Farm photo) 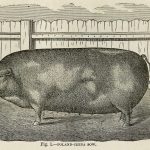