Home The Metro Parks Blog Peek under a pond

Nearly everyone’s been to a pond before. Maybe you’ve gone fishing, watched ducks, enjoyed a picnic nearby, or watched a scenic sunset from a dock or bench near the water’s edge. But have you thought much about what you might find UNDER the water? Our naturalists at Blendon Woods did some pond studies recently to see what they could find. We used small aquarium nets and trays to scoop up water and algae, and anything that came up with it! We also used “two way viewers” that magnify whatever you want to look at from both the top and the bottom.

Tadpoles are some of the more common critters found while doing a pond study. Tiny, black tadpoles are likely to become American toads later in the summer, while big brown or green tadpoles will become bullfrogs…. but only after they’ve spent two or three years as a tadpole.

Any pond study will uncover lots of insects. Dragonflies and damselflies start their lives as eggs in water, and mosquito larva are abundant in stagnant ponds. Water striders can often be seen on the water’s surface, their characteristic movement making it look as if they are skating, while snails cling to underwater plants, rocks, leaves and stems.

We saw these things, but also found some lesser-known insects in the Blendon Woods pond too. Water scorpions are about 2.5-inches long and look like a walking stick bug. They are predators that hide in aquatic vegetation, waiting to grab a passing meal (usually smaller, young insects) with their long front legs. The water scorpion’s tail is two long, hollow filaments that help the insect breathe air from the surface of the water.

We found an impressive water scavenger beetle, about 2-inches long, which swam very fast through the water and algae. Their hind legs have hairs on them, which help the beetle to swim so well. They alternate legs when swimming, giving the appearance of rowing. We found other beetles too, with interesting names like whirligig, predacious diving, crawling and water scavenger.

Giant water bugs are not always as big as some of the beetles mentioned above. The one we found was about 1-inch long and it was carrying eggs on its back. That means it is a male, as the females deposit their eggs onto the male’s back so he can care for them until they hatch. Giant water bugs have large, sharp front legs that are used to catch prey as big as tadpoles, insects and even fish. They are nicknamed “toe-biters.”

All of these water creatures play an important part in a pond’s food chain. Many of them eat algae and leaf litter, breaking up dead and dying plant material at the bottom of the pond. Then, these water bugs get eaten by bigger water animals like fish, frogs and birds. If we didn’t have the little creatures, we wouldn’t see the bigger creatures that help us enjoy pond habitats. Think about all of that next time you go fishing, birding, picnicking or peeking near a pond. 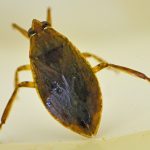 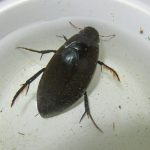 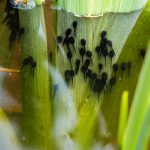 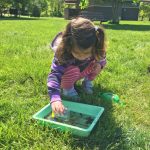