A group of very talented artists unpacked their paints, brushes and canvases at Inniswood Metro Gardens recently. All of them are members of the Ohio Plein Air Society, and they visited Central Ohio’s premier botanical gardens for one of their society Paint Outs.

Carol Cosgrove, the society’s Paint Out Czar (yes, that’s what it says on the society website), organizes these gatherings of artists at locations all across the state.

As Carol explained, the term (en) plein air translates from the French as (in the) open air, and is particularly associated with 19th century schools of art known for painting outdoors, including the Impressionists.

Now with almost 200 members across the state, the Ohio Plein Air Society began in 2002 when six artists formed an association to paint in every Ohio county. It led to an exhibition in Columbus and the publication of a book, followed by an article in The Columbus Dispatch. The society grew from that. In autumn that year, the society’s first ever Paint Out was held at Slate Run Metro Park.

Carol says, “We’ve held many Paint Outs in the Metro Parks over the years. They have a wonderful range of nature and beauty to attract an artist’s eye.” 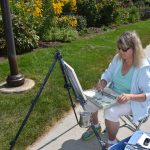 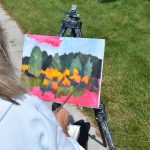 Carol Cosgrove painting over the pink wash of her canvas. 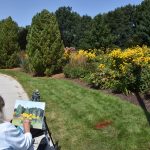 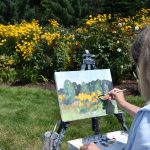 Carol Cosgrove working on her canvas of the scene adjacent to the Gardens Entrance. 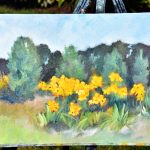 The artists paint in all weather and conditions. A few years ago the society organized a paint out at Homestead (a little before it became a Metro Park). “It must have been down to eight degrees,” Carol said, almost shivering at the memory. “My wipe outs, that I use to remove paint from my hands, had frozen solid.”

There were no such temperature problems on this late-August day at Inniswood. Carol set up her easel and palette box close to the Gardens Entrance, and was joined by her friend Sue Sabo. As they prepared their canvases, I walked with another artist, Karen Lavalley, who had scoped out an interesting scene to paint on a visit to the gardens a couple of days before. 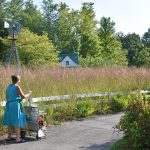 Karen Lavalley scopes out the scene at Inniswoods’ Sisters’ Garden for her painting. 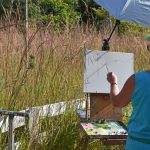 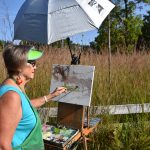 Karen adds first splash of color to her canvas sketch. 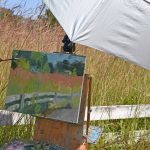 Karen works on her painting in the late phase. 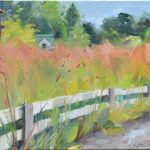 Karen Lavalley’s completed canvas of the Country Garden at Inniswood.

Karen, a charter member of the society, wheeled her cart alongside her, containing all of her painterly needs. “This cart goes everywhere with me,” she said proudly. “It cost me $3 in a yard sale many years ago. It’s like a valued old friend now.”

She was equally proud to have been exhibited with her daughter, Brooke, at a Mothers and Daughters Show of paintings and photographs at the German Village Meeting House last year. Her daughter is a photographer with The Columbus Dispatch. Karen was also in a show at the Turner Gallery in Clintonville recently. She loves painting in Metro Parks. Battelle Darby Creek is her favorite, but she likes to paint at Sharon Woods and Slate Run as well.

Having arrived at her spot, Karen used a composition finder to fine-tune the scene for her canvas. She chose to paint a view of the Country Garden that embraced the windmill and border fence, with Granny’s House just peeking above the top of the tall grasses. 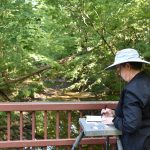 Susi makes a quick set of composition sketches to determine the orientation of her canvas. 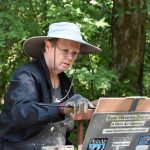 Susi Havens-Bezaire at work on her canvas. 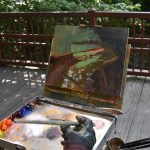 Susi’s canvas at about mid-phase. 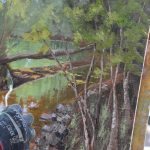 Susi adds some final touches to her oil painting with a spatula. 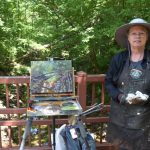 Susi with her final canvas of the scene of Spring Run at Inniswood Metro Gardens.

Another charter member of the Ohio Plein Air Society, Susi Havens-Bezaire, chose a shaded spot to set up her easel and canvas. I thought it was cleverly chosen, as the tall trees around the bridge over Spring Run kept Susi out of the sun. But it wasn’t fear of the heat that lay behind Susi’s choice of location, it was the light filtering through the leaves. “I love the way light and dark compete with each other in a scene. That’s what I want to capture. This is perfect.”

She made a quick sketch of the scene in both landscape and portrait orientation before deciding how to set up her canvas. She then made a third quick sketch, to make sure she didn’t have a “flinger.” This turns out to be the term Susi uses when she spends wasted time on a canvas, only to realize too late that it isn’t going to work. “And I have to fling the canvas away.”

Pretty soon, Susi was assured that this scene of the creek, dappled with light through the leaves and with strong lines of shadow from tree trunks, was not going to be a flinger.

As she began to set up her canvas, Susi spoke about her work as a painter and how she loves to paint in Metro Parks. Her favorite parks to paint in are Battelle Darby Creek and Prairie Oaks, but she was delighted to be at Inniswood today, as this is also special to her. She has lived in Columbus for more than 30 years but is originally from Indiana. She has been on the board of the Ohio Plein Air Society for the past seven years, but since she and her husband retired, they now travel a lot and also spend their winters in Arizona. 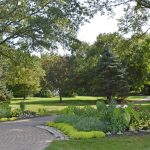 Large pin oak at border of circle garden, chosen as the subject to paint by Candice van Schoyck. 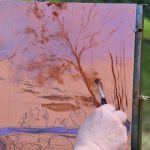 Candice sets the base for her canvas, with some undercolors and quick sketches. 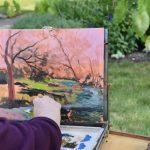 Candice working on her canvas at an intermediate stage. 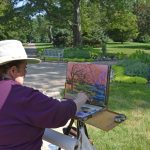 Candice in the Circle Garden builds up color on her canvas. 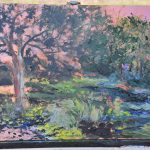 Candice’s painting of the Circle Garden and pin oak at Inniswood. She intends to work some more on the canvas at her studio.

Candice van Schoyck set up her canvas just inside the gardens entrance, her painterly eye attracted by a large pin oak in the Circle Garden. She has been a member of the Ohio Plein Air Society for four years and finds it a wonderful way of spending time with people who share a deep interest in art. Last year she had one of her paintings accepted into a curated show at the Columbus Museum of Art, one of her proudest moments, but she has exhibited at many other Ohio galleries previously.

“There’s nowhere better than the Metro Parks for painting outdoors,” she said eagerly. “I paint at one or other of them almost every Saturday.”

It’s nice to know that our beautiful parks are appreciated by such a devoted group of artists.

You can learn more about the Ohio Plein Air Society at their website: http://ohiopleinairsociety.com/

GALLERY: MORE ARTIST CANVASES FROM THE INNISWOOD PAINT OUT 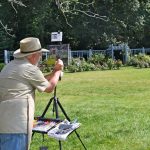 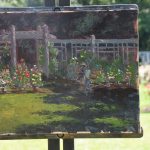 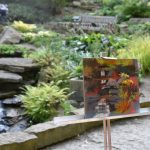 Angela Gage, who teaches at the McConnell Arts Center, worked in the Rock Garden at Inniswood. 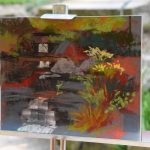 Close up of Angela Gage’s canvas of a scene at Inniswood’s Rock Garden in the late stage. 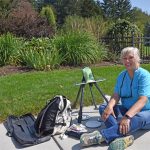 Sue Saba came to the Paint Out with her friend Carol Cosgrove and was proud to finish a small canvas of a scene near the Gardens Entrance.