One of the great pleasures of a summer trip to the parks is the sight of a prairie in full bloom. A vast golden canvas of ashy sunflower, gray-headed coneflower and other yellow blooms yields to the glorious touch of royal catchfly and cardinal flowers, their vibrant reds capturing and delighting the eye. Large patches of purple coneflowers, bergamot and blazing star add a reddish-bluish sweep across the canvas, tempered by the background swaying of tall and elegant prairie grasses.

To experience this visual treat at its finest, we recommend a visit to Battelle Darby Creek or Prairie Oaks Metro Park. More than 1,500 acres of prairie habitat have been restored here, using seeds native to the original Darby Plains. Late July and early August produce the peak blooms and a visit then shouldn’t be missed. If you don’t typically get out to these parks on the west side of Columbus, we have smaller but equally absorbing prairies at Blacklick Woods, Blendon Woods, Highbanks, Sharon Woods and Slate Run Metro parks.

The beauty is not without purpose. Many species of butterfly are attracted to these and other striking prairie flowers, such as butterfly weed and Sullivant’s and swamp milkweed. Butterflies lay their eggs on tall grasses like indiangrass and little and big bluestem. These and other grasses provide an abundant food source for the caterpillars. You will also hear bird song and see song sparrows and goldfinches aplenty as they feed in large numbers on the seeds of coneflowers and other plants.

To maintain the prairies as productive habitat for butterflies, birds and other wildlife, we burn large areas in late winter or early spring (when the blooms and the wildlife are absent). These prescribed burns eliminate the dried remains of the previous year’s growth and help to return vital nutrients to the fire-darkened soil, which in turn stimulates new and healthier growth the following season.

We estimate that more than 380 square miles of tall-grass prairies existed in the Darby Plains prior to European settlement. Back then, prairie fires were a natural phenomenon, many caused by lightning strikes, which ignited the very dry habitat. Few trees were adapted to the dryness of the plains, but bur oaks are an exception and you can see them now in our prairies, tall and stately, and dotted around areas of the state where prairies, long gone, were abundant.

Bison were another common site in the prairies of the Darby Plains before settlement. Now they roam the prairies again, if only in the pastures set aside for them in Battelle Darby Creek Metro Park. Take a walk on the Darby Creek Trail and look for the park’s 11 bison as they graze and wander through the tall grasses and blooms. Metro Parks partnered with The Wilds to bring six female bison to the prairie in 2011. The herd grew to 10 thanks to a half-year visit from a bull in 2013. In May this year, another female bison joined the family from The Wilds.

Although the peak blooms fade by late August, the prairies continue to present fascinating sights for visitors right through fall. Large swathes of indiangrass take on a yellow and then golden brown hue as autumn advances. When the sun strikes it, the reflections dazzle the senses. New blooms arrive too, with New England aster and goldenrod the most prominent and most colorful. 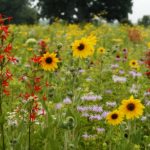 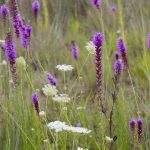 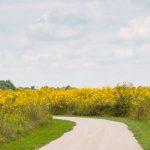 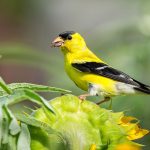 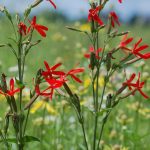 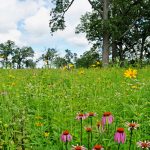 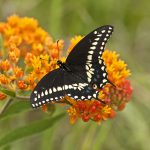 Black swallowtail on butterfly weed in the prairie (Kim Graham) 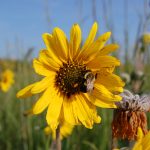 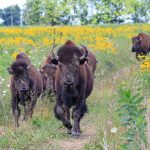 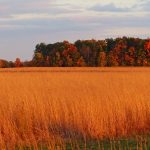