It’s that time of year, when you might see monsters. If you live within a few miles of a pond, lake or stream, you could step outside one morning and come face-to-face with a 20-pound reptile. But there’s nothing to worry about. In fact, you could be in for a treat. Chances are, it’s a female snapping turtle just looking for a place to lay her eggs.

Snapping turtles mate from April through November, with their peak egg-laying season in June and July. A female will stray far from water looking for sandy soil in which to dig a nest chamber. You may see her rub her nose on the ground; she’s testing the soil to see if it is soft enough. When she finds a suitable location, she’ll use her powerful back legs to dig a hole and deposit 10 to 80 (but typically 20 to 50) one-inch eggs that look just like ping pong balls. (See video)

Then, she buries the eggs and returns to the water, never looking back. Nine out of 10 nests will be raided by predators such as crows, minks, skunks, foxes and raccoons. Often the nest will be discovered and the eggs eaten the very first night. As hatchlings, the turtles may be preyed on by all those animals and more, including herons and other shorebirds, birds of prey, bullfrogs, large fish, snakes—and even other snapping turtles. It’s a wonder any snapping turtles survive at all.

But obviously they are doing something right, because they’ve managed to stick around for more than 70-million years. Snapping turtles shared the Earth with dinosaurs and are still around to share it with us. I sometimes wonder if they preferred the dinosaurs’ company to ours.

Snapping turtles have an unfair reputation for being vicious. On land they can be aggressive, but that’s only because they are out of their element and unable to make a quick getaway. In the water, snapping turtles can swim gracefully. They prefer to slip away quietly from people rather than attack. Even on land, they will usually attempt to scare you off by hissing, only snapping if you don’t get the message. It is thought that they evolved their powerful snapping jaws because they are too large to hide in their shells, unlike other turtles.

In spring, male snapping turtles wage combat to reestablish their territories. I once had the privilege of witnessing a battle between two large males at Blacklick Woods’ Ashton Pond. They thrashed and shoved in an aquatic Sumo match, hissing all the while. It was truly an awe-inspiring experience, and I took plenty of photos to chronicle the fight. We also have a video of a vicious snapping turtle fight at Ashton Pond.

Many turtles can be seen crossing roads at this time of year. If you see a snapping turtle crossing a road, you can help it by approaching slowly from behind, gripping the shell on either side of the tail (they have incredibly long necks and can reach all the way back to their hind legs to bite you), and carrying it across in the direction it was walking. Don’t take it back the way it came from; it will just try to cross again. This applies to all turtles. You may have heard that it is safe to pick up a snapping turtle by its tail, but this should never be done, as it can damage the turtle’s vertebrae. Other than to help it cross a road, please don’t move any turtle you come across. It’s probably a female just looking for a nesting site. 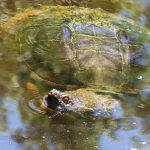 Snapping turtles are slow on land, but swim gracefully. A snapping turtle’s nostrils are on the very tip of its snout, effectively functioning as snorkels. (Cameron Svoboda) 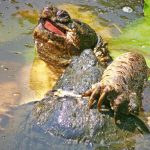 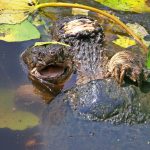 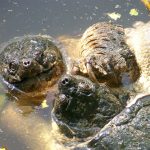 Snapping turtle fights over territory can be long and vicious. (Cameron Svoboda) 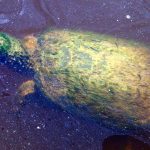