Have you ever wondered what animals do when it snows? For many species, food sources and water are buried under snow and ice. But to other animals, snow is a protective layer providing warmth and cover from predators.

One way animals deal with snow is to sleep. Well, not sleep exactly! Many animals undergo a type of torpidity, or change in their body’s metabolism. Hibernation is the most dramatic example of this. True hibernators cannot be easily woken up and are largely unresponsive to external stimuli. The often-used example for hibernators, the black bear, is not a true hibernator because it actually can be awakened quite easily.

Less extreme than hibernation is torpor. Skunks and raccoons enter a state of torpor where they are able to live off the fat they stored during the summer and fall. They are easily awakened and come out during nicer weather to search for food.

Cold-blooded animals are more accurately said to go dormant. They lack the internal mechanisms to produce heat that warm-blooded animals have. Reptiles and amphibians move to protected places underground, or under water, to avoid freezing temperatures and snow. Freezing liquid in their cells can destroy tissue, but some species can tolerate low levels of ice between cells. Spring peepers, chorus frogs, gray tree frogs and wood frogs can tolerate a frozen state. These frogs thaw out in spring, which is why we hear them sing so early in the season.

Then there are those animals that don’t hibernate at all. Foxes, weasels and other predators have to hunt throughout the winter. They have a well-developed sense of hearing or smell to be able to hunt for prey buried beneath the snow. Flying squirrels, who normally live alone, will occupy collective dens to conserve body heat. The white-tailed deer grows a winter coat with longer hair. This hair is also hollow inside to provide good insulation against the cold. This adaptation works so well that snow won’t melt after landing on the deer.

These animals have all adapted to dealing with the inconvenience of a winter snow. However, there are animals that rely on the snow for warmth and protection. On cold nights, ruffed grouse will fly into a deep snowdrift. The snow provides a very effective barrier against severe cold and wind. They will rest under the snow until the severe weather passes.

Small mammals such as mice and meadow voles remain active throughout the winter. They make little haystack nests to keep them warm during the winter and they create tunnel systems among the grasses under the snow. This hides them from hawks and other predators. The temperature is much warmer beneath the snow. Air is trapped amongst the snowflakes as they fall and this provides good insulation. The temperature under a layer of snow does not usually fall below freezing. The heat from any animals or plants under the snow is trapped in a warm “igloo.”

The next time you are shoveling snow, don’t forget the animals who have escaped it, by migrating or going dormant, and those that welcome it, and build tunnels and igloos into it.

By Jamie Kidwell (From Parkscope Winter 2011) 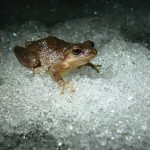 Oh boy, this spring peeper chose a bad day to venture out and about. (David Celebrezze) 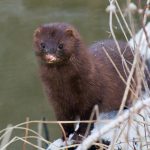 Mink on the banks of the lake at Blacklick Woods Golf Course. (Terry Peck) 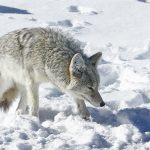 Coyote labors through the snow at Blendon Woods. (Cheryl Blair) 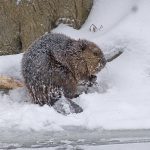 Deer in a clearing on the Dyer Mill Trail at Battelle Darby Creek. (Kerry Dunn)