Be warned! If you see a stink bug in your house, don’t smash it, or you’ll immediately get to know how stink bugs got their name. Look up “P.U.” in the dictionary. Your kids might see a beautiful looking bug and be captivated by its brilliant, shiny orange-red color. But watch out that this orange ladybug doesn’t bite them.

Stink bugs and ladybugs spend the winter inside the walls of our homes and can sometimes emerge into our living areas. These home invaders are definitely a nuisance, but are all stink bugs and ladybugs bad? Have they always been here or are they new arrivals? What other problems are they causing, and what can we do about them?

A bug is a bug is a bug
The word bug has many connotations, but scientifically, a bug is a member of the Hemiptera, the true bugs. They are insects, so they have six legs, three body sections, two antennae, and either four wings or none at all. The true bugs have piercing mouthparts, like a straw, so they only feed on liquids. This group includes aphids, cicadas, water striders, and bed bugs.

A subgroup, the heteroptera, includes the stink bugs. These bugs have a prominent triangular plate on their backs called a scutellum, and their front wings are half-leathery, half-membranous. The stink bugs are so named because they have large glands on their undersides that produce a smelly liquid when the insect is disturbed. They are somewhat shield-shaped, and so have also earned the name shield bugs. There are more than 5,000 species of stink bug worldwide.

Brown marmorated stink bug
Out of these 5,000 species, Ohioans are most familiar with the brown marmorated stink bug, an invasive species. They are mostly brown, with a marbled pattern on their backs and white stripes on their antennae. Hitching a ride on a shipment of produce from Asia, these bugs accidentally became established in the United States in the mid-1990s. The first colony was discovered in 1998 in Allentown, Pennsylvania, and they have spread quickly. As of 2013, they had been detected in 40 states and also in Ontario, Canada.

In most states, stink bugs are only a nuisance; they overwinter in houses and can end up in annoying places. However, in areas where they have been established for a few years, they can cause severe agricultural problems. The brown marmorated stink bug is a plant-feeder, so it uses its piercing-sucking mouth to drink plant juices. This causes problems when the bugs feed on apples, corn and soybeans. Digestive enzymes cause the plant to rot wherever the bug bites it, resulting in disfigured and inedible crops. Severe crop damage has been reported in Pennsylvania, West Virginia, Virginia, Maryland, Delaware and New Jersey.

Farmers are desperate to control these pests. While traditional insecticides do not usually kill these stink bugs, a pheromone trap has been shown to be effective. Fortunately, studies have shown that some native predators, like wasps and birds, have adapted to the new arrivals and now see brown marmorated stink bugs as a food source. Hopefully, this will help reduce their exploding population.

Although the brown marmorated stink bug is now the easiest stink bug to find in our area, there are more than 220 species of stink bugs in North America. Some of these stink bugs are pests, but native predators are adapted to eat them, even though they cause us to wrinkle our noses. Spiders, birds, toads and other insects will eat stink bugs. There is one stink bug, the anchor stink bug, that is a help to us. They are predators of pest insects and can kill many caterpillars and Japanese beetles that would otherwise damage ornamental plants.

Multicolored Asian lady beetle
I once heard that those orange ladybugs aren’t real ladybugs: they’re “lady beetles.” That’s why they bite and invade our houses. But the truth is more complicated. The term ladybug actually refers to a family of beetles, the Coccinellidae. There are over 6,000 species of these beetles worldwide, and most are predators of small insects. They are often brightly patterned with black, red, yellow, or orange spots.

The red color of some of these beetles earned them the “lady” name, which refers to the red clothing of Mary in early Christian paintings. Their round bodies and bright colors make them attractive to children and their predatory nature makes them beneficial to farmers. But one species of lady beetle has changed attitudes about these tiny insects in America: the multicolored Asian lady beetle.

This Asian species was introduced to the United States several times in the 20th century, both intentionally and accidentally. These beetles were found to be more voracious than our native species, and appeared to be resistant to local diseases. This excited American farmers, who imported the beetles from Asia and released them into their fields and greenhouses where they would eat aphids and scale insects, sap-sucking pests that harmed crops. These introductions went on for decades before the Asian lady beetles finally established wild populations in America. The first colony was discovered in Louisiana in 1988. Strangely, this population probably escaped from imported crop shipments rather than the many releases by farmers. They spread from Louisiana, meeting another group that had appeared in the northeast in the early 1990s, and they now exist in every state and throughout much of Canada.

A multicolored Asian lady beetle is usually orange, but they can also be yellow, red or black. The number of spots can range from zero to nineteen. The spots are usually black, but black beetles can have yellow, red, or orange spots.

In their natural habitat, they congregate on south-facing rock cliffs in the fall to absorb heat. They use these sites for hibernation, crawling into cracks and caves to escape the cold. Now that they have invaded North America, houses serve the same purpose, which is why they appear indoors during the cold months. Like the brown marmorated stink bug, the Asian lady beetle is mostly a nuisance to homeowners—they smell bad, they fall in your drink, and they have been known to bite human skin with no provocation. Also like the brown marmorated stink bugs, they can be agricultural pests. Even though these beetles were initially considered beneficial, in large enough numbers then can contaminate sensitive fruits like grapes and can even alter the taste of wine.

The most distressing outcome of this invasion is that they compete with our native lady beetles. Several once-common species are now difficult to find. For example, the convergent lady beetle, Ohio’s state insect, has shown a significant decline since the Asian lady beetle entered the United States. The relationship between the two species is not well-understood, but the Asian variant seems to have the advantage. They are not only resistant to diseases, they can carry and spread these diseases to the other lady beetle species. There are over 480 native species of lady beetle in North America and many of them could be at risk of extinction due to this invasive species.

Solutions
The easiest way to deal with a home invasion of either of these insects is to vacuum them up. Use a nylon stocking secured with a rubber band to trap them inside the hose of your vacuum so that they don’t collect in the machine itself. This prevents them from contaminating your vacuum with their unpleasant odors. Make sure you try to seal any cracks or openings that may have allowed them to enter the house in the first place.

We must also think beyond our own homes and try to prevent invasive insects and other organisms from entering our country. The easiest thing you can do is to buy more local products. There is always a chance that something shipped from halfway across the world has an insect hidden in the packing material. Everyone has heard the story about a bunch of bananas that housed a giant spider.

Imagine a shipping pallet that hid a beetle that killed hundreds of millions of trees and is still going strong. Both are true, but the second one is the real horror story. The emerald ash borer has ravaged our eastern forests over the last decade. Buying local doesn’t seem like much, but it might just prevent the next brown marmorated stink bug or multicolored Asian lady beetle from making its winter residence in your home. 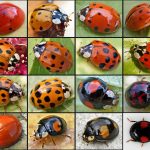 The many forms of the multicolored Asian lady beetle (copywrite: entomart) 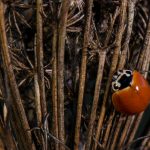 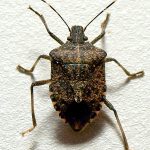 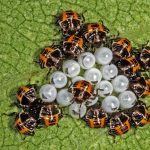 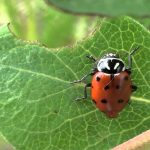