Students at The Ohio State University and professional researchers are conducting some fascinating studies in Metro Parks. Here are just three of them.

Bridget Brown, a Master of Science student in the Department of Evolution, Ecology and Organismal Biology at The Ohio State University, wanted to see if bats use scents from other bats to find roosts. Brown set up two roosts, one with guano and one without. Over the course of six months, she moved these roosts weekly amongst seven Metro Parks (Blacklick Woods, Highbanks, Pickerington Ponds, Scioto Audubon, Scioto Grove, Slate Run and Walnut Woods.)

Brown installed a highly sensitive bat-detector microphone on top of each roost. It picked up more than a million sound files and determined that there were 173 visits to the roosts. Bats visited both roosts equally, which disproved suggestions that scents played a major role in the location of roosts.

Brown will use the results for her Master of Science degree at The Ohio State University. “I was really fortunate to be able to work with Metro Parks staff who helped me find bat condos in the parks where my roosts and monitoring equipment could be installed,” she said.

Jacqualyn Halmbacher, a Research Associate in the Department of Evolution, Ecology and Organismal Biology at The Ohio State University, is leading a project to return mussels to their natural environment at Big Darby Creek in Prairie Oaks Metro Park and in the Kokosing River. The project involved the installation of two concrete silos in the rivers, and the mussels of many species, all grown in culture dishes, were placed in mesh inserts within the silos. 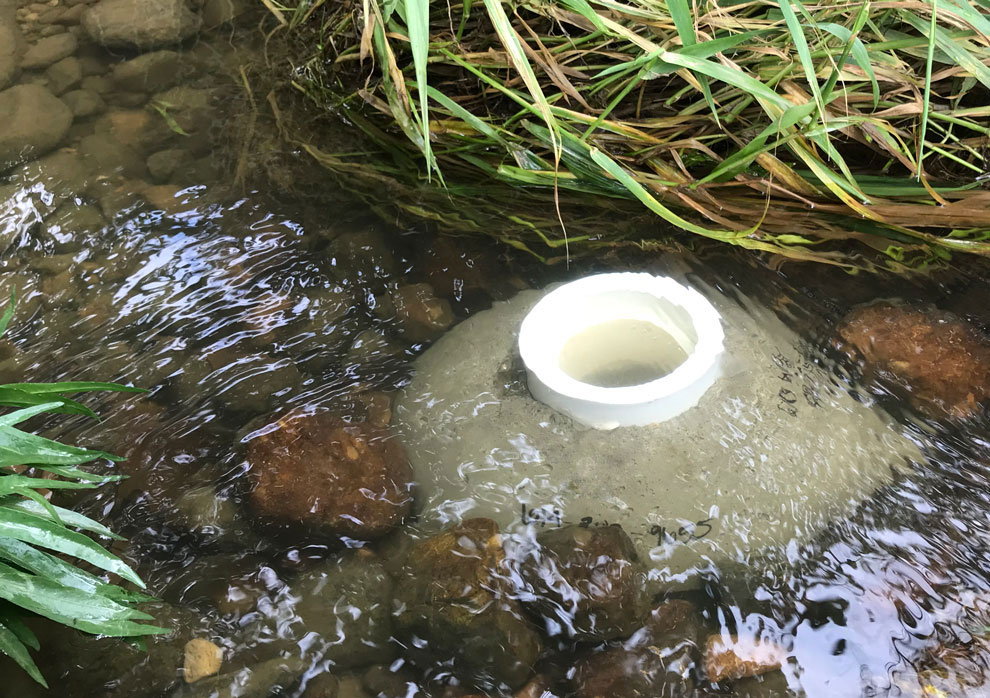 Halmbacher monitored the growth of the mussels at both sites. Initial findings indicate that placing mussels in their natural environments right after removal from their incubators is a more successful method than rearing the mussels to adulthood in a lab. Halmbacher said “Metro Parks was extremely supportive of the research, from granting permits to helping with site selection. I couldn’t have gone to anyone better than Metro Parks’ Aquatic Ecologist, Andrew Boose, who helped me find the best study sites for this project.”

A redesign of the silos will help her repeat the experiment next year. The in vitro method allows tens of thousands of mussel larvae to grow in petri dishes whereas raising lab juveniles only produces hundreds. “In the petri dishes, the larvae develop organs, such as a heart, stomach gills and a foot. At this stage they are considered juveniles and we place them in the silos in the creeks,” Halmbacher said.

The project is a collaborative effort between The Ohio State University, Metro Parks, The Ohio Division of Wildlife and The Columbus Zoo and Aquarium.

There were 73 species seen in Metro Parks. At Prairie Oaks, they recorded a swift setwing dragonfly, the first Madison County record of this species. The first Franklin County record of the same species was made at Battelle Darby Creek’s Osprey Lake. Of 171 species of dragonflies and damselflies in Ohio, 23 are listed as state endangered, threatened or of concern.

Spring said “This study is helping to determine which species are becoming rarer and which might be improving in numbers. We have had overwhelming support from volunteers who take photographs in Metro Parks and upload them to the iNaturalist site. Thanks to Metro Parks, we also have a permit to collect specimens in the parks.” Spring is working on a large report on the dragonfly survey for Ohio Department of Natural Resources. She is also working on a book about Ohio dragonflies and damselflies, with collaborators Dave McShaffrey and Jim McCormac.

Carrie Morrow, Metro Parks Assistant Resource Manager, is a big supporter of these studies in the parks. “Metro Parks grants permits for more than 50 research studies each year. With the guidance of the natural resource management department, studies are conducted on multiple topics, including animal and insect research, water quality monitoring, rare native species research, invasive plant control and many other topics,” she said. “Researchers from universities and the private sector aid the overall management of Metro Parks’ natural habitats. Our Metro Parks act as land labs to help further the development of the knowledge of our natural history as well as how best to be stewards of the land.”