It’s loud. To some creatures it is a feast. It might be called Swarmegeddon. It is the emergence of Brood V of the 17-year periodical cicadas. Sometime in May, when the temperature eight inches below the soil surface reached 64 degrees Fahrenheit for four straight days, the cicadas crawled out, climbed trees and shrubs and began trying to find a mate. An acre of mature forest might have tens of thousands, hundreds of thousands or occasionally more than one million cicadas.

In 1999, the parents of this generation mated and females laid their eggs in tree branches. After a few weeks, larvae fell to the ground and burrowed into the soil. For 17 years, they fed on fluid from plant roots and when the soil temperature was right the nymphs emerged. The nymphs crawled to the nearest tree and shed their exoskeleton. Their wings filled with fluid, their new exoskeleton hardened and the cycle began anew.

Males sing to attract females. At the base of a cicada’s abdomen is a pair of membranes called a tymbal. By contracting the tymbal the cicada produces its sound. A chorus of cicadas can be louder than a rock concert or passing airplane. The sound is so loud that even cicadas need to protect themselves from the volume of their songs! They have large membranes called tympana that act like ears. The tympana retract when the male sings so that it won’t be damaged by the sound.

Adults and nymphs feed on xylem fluid – the watery part of plant sap – in the twigs and roots of woody plants. They don’t chew but feed by sucking through their proboscis. Cicadas don’t bite or sting. They have five eyes – two large, red compound eyes and 3 simple eyes.

Individual cicadas live a few weeks, but since they emerge over a two week period the show lasts four to six weeks. The loudest noise starts about 10 days after they first begin emerging.

Birds love to eat cicadas. They’re filled with protein. Wild turkey populations usually increase in cicada years since the young turkeys are growing just when the cicadas are out. Mole numbers often increase in the years just before emergence as they feed on underground larvae, then crash afterwards. Even some people eat them but anyone with shellfish allergies should avoid eating cicadas. (By Scott Felker, Naturalist at Three Creeks Metro Park)

Check out our upcoming cicada programs:

CLEAR CREEK – Friday, June 3rd @1pm
Take a 1-mile hike and learn about Brood V cicadas and their once in every 17 years emergence.
Thomas-Mathias Parking Lot
BLENDON WOODS – Sunday, June 12th @11am
Take a 2-mile walk to search for signs of the emergence of these insects, which happens just once every 17 years, and learn about their extraordinary life cycle. 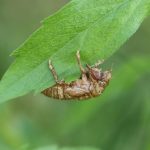 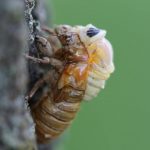 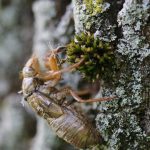 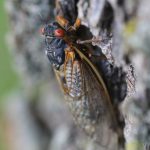