Home The Metro Parks Blog Thanksgiving on the Farm

The idea of Thanksgiving in America often conjures up images of Native Americans and early settlers around tables laden with food. George Washington was the first president to declare a national day of thanksgiving and prayer, for Nov 26, 1789. Other presidents set aside national days of thanksgiving after that, but President Abraham Lincoln finally declared it a federal holiday in 1863. (In 1941, Congress enshrined this national holiday into law.) Journals from the 1880s mention Thanksgiving as a time to refrain from work, gather with family, and attend church services. These same journals also included the reality that rural Americans never really had a day off. Farm work, such as husking and hauling corn shocks, buying and selling livestock, hunting, and caring for animals, still had to be done. The women were still busy storing root crops from the garden and preparing the food for the day that included some special family favorites for the holiday.

The Thanksgiving meal in the 1880s usually consisted of some type of poultry. Turkeys, chickens, geese or quail that hatched out in the spring would be the prime size to grace a family’s table at the end of November. The meat was supplemented with fruits and vegetables preserved from the garden over the course of the year. For dessert, a variety of pies and possibly a hickory nut cake were made, depending on what was harvested that fall.

More than the food or the time to relax, it seems the real treat was to simply gather together with family. The number of gatherings was limited throughout the year, due to the ever-present demands of the farm and the often difficult travel conditions. As the harvest season drew to a close, family members used this time to exchange details about the past year’s events and their plans for the future. Below are two recipes for Slate Run Farm favorite desserts. Enjoy…

Optional: A tablespoon of brandy is a great improvement to pumpkin or squash pies.

Beat all well together, and bake in crust without cover. Bake for 15 minutes at 425 degrees F. Reduce temperature to 350 degrees F.; bake for 40 to 50 minutes or until knife inserted near center comes out clean. Makes three pies. 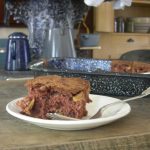 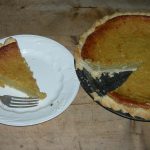