Congratulations to Shelby Watkins and Dustin Davis.  Shelby and Dustin successfully completed the Ohio Peace Officer Training Academy, becoming certified peace officers by the State of Ohio.  They were sworn in as newly commissioned rangers at the last Board of Park Commissioners meeting held December 13, 2016 at Inniswood Metro Gardens.  They are now able to not only enforce park rules and regulations, but also enforce the laws of the State of Ohio.   Ranger Watkins will be stationed out of Highbanks Metro Park while Ranger Davis will be stationed out of the Greenway Trails.  If you see them while out enjoying your Metro Parks, say hi and congratulations! 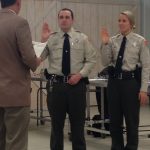 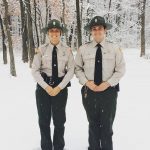