A stroll or run through a Metro Park provides many views—forest, fields, mid-succession areas and mowed lawn areas. Fields provide a habitat for many plants and animals and are typically maintained to stay as that habitat, but were not planted with prairie flowers and grasses.

If left alone, most fields and prairies would revert back to forest over time. To the casual observer, there are many colors but individual flowers can be easily overlooked. Many are quite interesting and upon further investigation, may prove to have hundreds of flowers in what one may think is just one flower.

Wildflowers are considered either native or naturalized. Native flowers were in the state prior to European settlement. Other flowers are non-native and were brought to America either accidentally or on purpose. They naturalized to their new environment. Some flowers have spread and become invasive.

Many of these non-native flowers have been in Ohio for over 200 years and were the source for interesting folk remedies. Some of these naturalized plants are now called weeds because of their abilities to grow in yards and to spread. Regardless of their country of origin, many wildflowers provide a foodsource for our pollinating insects.

Below are some native and naturalized wildflowers that can easily been seen in a field during a short walk. But remember to stop and take a closer look. Make sure you head out soon, as our living landscape is ever-changing. Stay tuned-in to a field near you. New flowers are waiting to bloom and our planted and restored prairies will soon be alive with fiery colors. 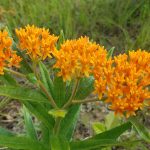 Despite its name, the butterfly weed is not an invasive weed at all. This plant, also known as butterfly milkweed, is used by monarchs and gray hairstreak butterflies. The roots were once used by Native Americans to treat pleurisy and other ailments. Native 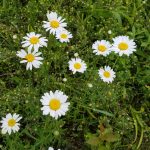 The ox-eye daisy is also known as the Marguerite Daisy in reference to a drama that included the infamous “he loves, he loves me not…” refrain. The yellow center is actually hundreds of individual disk flowers. Naturalized and slightly invasive 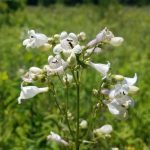 Foxglove beardtongue can be almost 4-feet-tall with tube-like white flowers. These invite insects like this native bee to land and get nectar, while pollinating the flowers. Native 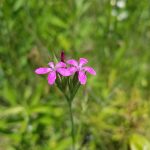 Deptford pink is a diminutive flower (half an inch) in the pink family. It was named from its original location in Deptford, England. Naturalized 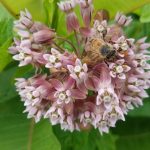 Thanks to various pollinator initiatives, most people are familiar with common milkweed, the host plant of the monarch butterfly. Its flower clusters are made up of numerous individual flowers, each no more than half an inch. Native 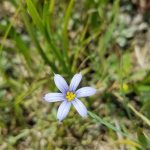 Blue-eyed grass is a beautiful single blossom on the end of a leafless, grass-like stalk. Flowers are only ½ inch wide and the slender stems are quite strong. They are flat and this concept is seen in the use of I-beams in construction. Native 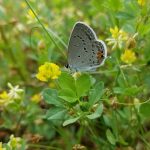 Black medick is a member of the pea family. It has black, kidney-shaped seeds in the fall. An eastern tailed-blue butterfly finds nectar on the flowers. Naturalized 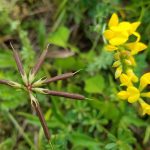 Bird’s foot trefoil is so-named because the seeds resemble a bird’s foot. This member of the pea family is an important source of food for wildlife. It was originally used as a groundcover but is now used by deer and butterflies. Naturalized 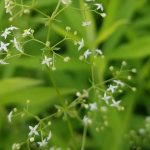 Several species of bedstraw have a variety of uses from being stuffed into mattresses and added to milk to make it curdle. Naturalized and sometimes very invasive 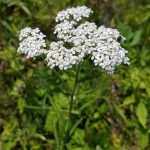 Small flowers make up each cluster of yarrow, a very sturdy plant. When crushed, the leaves smell like carrot. It was once used to make tea for colds and fever and to cure stomach disorders.
Naturalized