Now that football season is here, Ohioans turn their focus to The Ohio State Buckeyes. Living in Columbus, it is impossible to ignore the barrage of buckeyes across all media. Fans are familiar with the buckeye nut, as it is the basis for the team’s mascot, Brutus Buckeye. This iconic mascot did not debut until the fall of 1965. Up until that time, OSU had no mascot.

The leaves of the Ohio buckeye tree are also familiar to Ohio State football fans. The five leaflets appear on helmets in the form of stickers, which are awarded to players based on individual and team accomplishments.

This imagery of buckeye trees is deeply engrained in Ohioans, whether they are football fans or not, but less well-known is how Ohio received its nickname. Buckeye trees grow throughout the eastern United States, but only Ohio is affectionately referred to as the Buckeye State.

One logical explanation for Ohio’s nickname is simply the abundance of Ohio buckeye trees in the state. They are common understory trees throughout Ohio, usually found along streams and in fertile bottom lands. They prefer moist, but well-drained soils and grow readily under the shade of larger trees. Historically, the wood from buckeye trees was used for building furniture and crates. The lightweight wood also made it appealing for carving, whittling and the making of fine utensils.

Perhaps the first time the term Buckeye was used to describe an Ohioan occurred in the late 18th century. Colonel Ebenezer Sproat, a large, imposing man, proceeded through the state to establish the first court in the Northwest Territory. His great stature deeply impressed the indigenous people of the area, who affectionately referred to him as “Hetuch,” their word for the eye of the buck deer. As frequently happens, nicknames stick and evolve. Colonel Sproat was henceforth known as “Big Buckeye” and this nickname eventually transferred to all Ohioans and the state as well.

Another story behind Ohioans being referred to as buckeyes nationwide dates from 1840, when General William Henry Harrison was elected president of the United States. Harrison, an older and more rustic candidate than the incumbent, President Martin Van Buren, was ridiculed by his opponents, who claimed he was “better suited to sit in a log cabin and drink hard cider.” Harrison’s supporters took this attempted dig at their candidate and spun it into a positive by naming him the “log cabin candidate.”

As his campaign emblem, Harrison used an image of a log cabin made of buckeye wood with a long string of buckeyes decorating the walls. His supporters would carry buckeye walking sticks in parades. Continually embracing this log cabin persona, supporters even penned lyrics to be sung to popular melodies.

While the origins of the Buckeye nickname may date all the way back to Colonel Sproat in 1788, it wasn’t until 1953 that the Ohio State Legislature made the Ohio buckeye the official state tree. Today, you won’t see many buckeye log cabins or walking sticks across the state, but you can’t miss the buckeye leaves and nuts come football season. 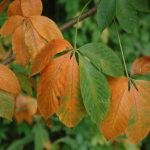 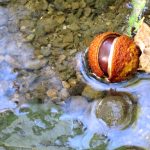 A buckeye husk opens to reveal the nut inside. (Mark Converse) 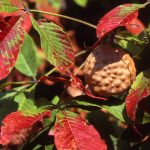 Buckeye leaves and husk of a buckeye nut. (Mac Albin) 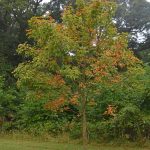 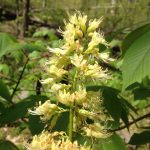